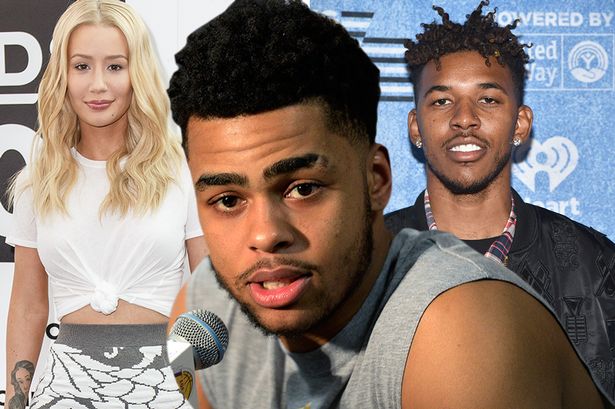 The last thing people should do is record a video or audio of intimate stuff,because knowingly or unknowingly,they find a way to get out.
Los Angeles Lakers player D’Angelo Russell has apologised for recording a video of teammate Nick Young following a huge backlash.Russell came under fire and even got sidelined by team mates when a video of Iggy Azalea’s fiance - confessing about cheating with other women surfaced online.
I actually believe D'Sngelo did not release the video intentionally,they probably sent it to one of their mutual friends who sent it to another etc,and Bingo! its out there for the whole world!

The video was reportedly filmed back in December and was made public last week.
Breaking his silence, he told The Vertical:

“I am sorry about recording the video. I can’t repeat myself enough on that: I am sorry I recorded that video. I feel horrible. I wish this never happened.

When asked how the video made it's way into the public, he said:

“Honestly, I have no idea. Me and Nick, that’s our friendship: We play around a lot. Anyone who knows him and knows me, they know that about us. But I apologise for recording that video. I never intentionally wanted to hurt anyone. I never wanted what was said in there to get out. It was my fault that it did, but that was never intentional.

“I’ve said to myself over and over: What could anyone possibly gain by intentionally doing something that could hurt someone else’s relationship? I never wanted to hurt anyone. I’m sorry for it.”

Now D'Angelo will be forever tainted as a snitch within his friends circle.Lesson for some i hope.