Ronnie Corbett dies at 85 and it's Goodbye from him

Ronnie Corbett dies at 85 and it's Goodbye from him 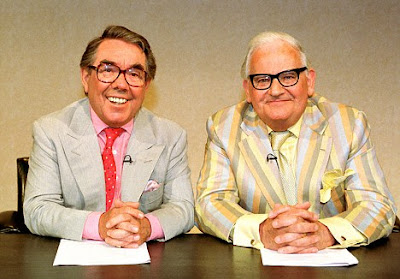 Ronnie Corbett has died aged 85.
The entertainer was best known for BBC comedy sketch show The Two Ronnies along with Ronnie Barker.
He was also famous for sitting on a chair while telling the funniest stories with a dead pan face during his comedy sketches.
His publicist said: "Ronnie Corbett CBE, one of the nation's best-loved entertainers, passed
away this morning, surrounded by his loving family.

"They have asked that their privacy is respected at this very sad time."
I grew up with Ronnie and it's just hard to imagine him being dead.I know we all die one day,but you just get so used to him being around and think he will be around for ever.

Corbett was one of the UK's best-loved comedians and along with Ronnie Barker, their double act was one of the most successful of the 1970s and '80s.
The entertainer had been suffering from ill-health for some time and had been in hospital in 2014 with gall bladder problems.
Following Barker's death in 2005, Corbett continued to be regular fixture on UK TV and is perhaps best-known for his armchair "shaggy dog" sketches.
His most memorable solo projects include the sitcom Sorry! and the game show Small Talk. He most recently starred in the BBC Radio 4 sitcom When the Dog Dies.
Corbett is survived by his wife, Anne Hart, with whom he celebrated his golden wedding anniversary last year, and the couple's two daughters, actresses Emma and Sophie Corbett.
Scottish-born Corbett started his career on David Frost's satirical comedy the Frost Report in 1960.
It was here he first met Barker and formed the duo whose TV sketch show became a British TV classic, regularly cited by the public as one of their enduring favourites and by other comics as a big influence on their careers.

The Two Ronnies ran from 1971 to 1987 and saw the comedians take part in musical performances and sketches.
Speaking to The Telegraph about how well they got on in 2013 he said of Barker: "We were a real couple with matching tastes and styles.
"Of course we were quite different but somehow we fitted so well together. I think it's a more pleasant and palatable thing to see people being funny together because you're touching areas of truth. Dinner parties or falling out with people - it's the naturalness of it."
May his soul rest in peace

Here are some classic moments of the dead comedian Ronnie Corbett below...