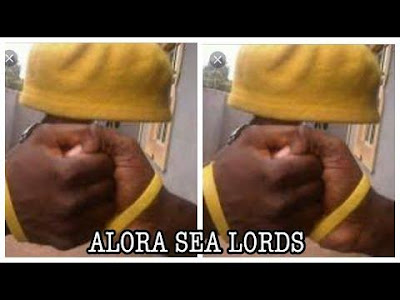 The Alora sealord's started in Ibadan Nigeria,We trace their history.
Formerly known as The Pyrates Confraternity, it was founded to fight societal issues. In 1972, in Jolly Rogers 1. The Confraternity was turned upside down when uprisings started due to corruption and nepotism started assuming exalted positions. A cadre of supposed Super Pyrates violated the Confraternity's creed with Impunity, tribalism and petty alliances which they established in the Confraternity. At this point odas had ceased to be odas, giving rise to chaos, ridicule, confrontations,
anarchy, counter black spotting and black spotting.

At this point, two men decided the Pyrates has failed them, they therefore left and started a new Confraternity to uphold the wrong doings the Pyrates had started embracing. These gentlemen by name Bolaji Carew and Kunle Adigun, chose the name of their newly created Confraternity with a specific intent.  Referring to the book "Fanny" they believed the Buccaneers were meant to be society's roving policemen, who should be naturally and morally more superior to all seafaring creatures. Hence the name "Sealord"

The Confraternity was thus born in University of Ibadan (Modaship) with Bolaji Carew as it's first head in 1972. The Confraternity remained There in till 1976 when the idea of a national outlook was conceived. The graduate body was growing and spreading to other areas of the country and their good deeds was spreading too. A clamour to create other decks was in increase and it was eventually accepted. This led to the establishment of decks in various institutions of higher learning around the country.


The growth and spread of the Confraternity on university campuses was not without attendant problems, it coincided with the expansion of other student movements which consequently resulted in squabbles in many campuses. The buccaneers conscious of the need to provide direction, uphold the ideals of the Confraternity and to further cement the ideals of a nationally recognised body, a group of the older Sealords gave strength to the formation of the Buccaneers Association of Nigeria (BAN)whose inauguration was performed at the Modaship in 1982 during the tenth anniversary tagged DOUBLOON.

The creation of BAN from 1982 provided another beginning and new challenges for the Confraternity. The restructuring of the hierarchy came into effect. As a step to rein in the excesses of the under graduate members the student body lost their autonomy and became a subordinate to the Odas of the Grand Eye, The national head.


The Buccaneers Confraternity has weathered many storms and is beginning it's 5th decade as a vibrant Confraternity. It is a world-wide Confraternity with bases including the United Kingdom, the United States of America, South Africa, Malaysia, Mainland Europe and Canada.
Tags news Nigeria
Previous Post Next Post