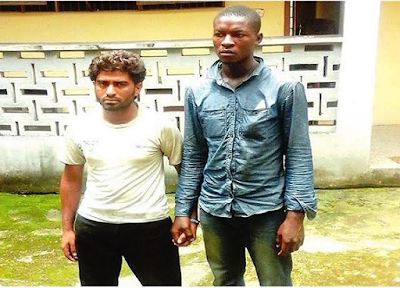 Why would a foreigner be smuggled into Nigeria? Especially one from Pakistan.It's nota s if we have the most stringent imigartion system.
A Pakistani man identified as Sahid Mahmood has been arrested after he was smuggled into Nigeria through a bush path in Etung, a border community with Cameroon, Vanguard reports.
Mahmood is to be thoroughly screened by the Nigerian Immigration Service and other security agencies to ensure he is not on the wanted list of any country before repatriation.
Speaking to Vanguard in her office in Calabar on Friday, the Cross River State Comptroller of the Nigeria Immigration Service, Mrs Funke Adeuyi said that Sahid was smuggled on a motor cycle through bush path into Etung from where he went to Ikom and was on his way to Lagos when he was intercepted by border Immigration officials at the village of Yahe, in Yala Local Government Area of the state.

Mrs Adeuyi added that the Pakistani man was arrested along with a Cameroonian accomplice, Nji Hagis Chi who said he met Sahid at the bus station in Ikom and decided to function as his guide to Lagos where he was going for an undisclosed reason.

She said the man only had documents that took him to the Duala Airport in Cameroon but was smuggled into Nigeria suspiciously therefore thorough security checks would be carried out on him and his accomplice before they are repatriated to their countries.
Mrs Adeuyi disclosed that there are several illegal routes through which people access the country and warned motorist to desist from adding and abetting those who come into the country through illegal routes owing to obvious security risk.