Zimbabwean fans angry at Wizkid for missing concert on Friday!

Zimbabwean fans angry at Wizkid for missing concert on Friday!

byNaija Blog Queen Olofofo -April 09, 2016
0
Wizkid failed to show up for his concert in Zimbabwe on Friday.Wizkid himself had been promoting the concert on social media so it's a shocker that he didn't turn up at the show to the disappointment of thousands of Zimbabwean music fans.
Zimbabwean media reports that fans had gathered at the venue, an open field from 7pm to 2am in the rain waiting for Wizkid who never showed up.

It was Wizkid’s first ever concert in Zimbabwe on Friday April 8, 2016 and according to various
reports, it flopped.

Wizkid was billed to perform at the Old Hararians Sports Club last night, but for some reasons he didn’t show up at the venue despite the fact that he was in the country. 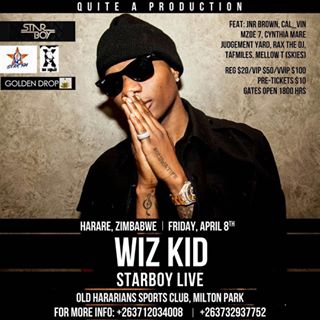 Zimbabwean media reports that fans had gathered at the venue, an open field from 7pm to 2am in the rain waiting for Wizkid who never showed up.
Zimbojam reports that ‘After a number of local acts, including the likes of Cynthia Mare, Mzoe7, Cal_Vin and Jr. Brown staged some lukewarm performances ’till around 1 am, the crowd began demanding for Wizkid to come on stage as the rain became heavier’.
‘Shockingly, the organisers decided to bring Judgement Yard on stage; they had an outstanding session which proved that even the uptown youth love dancehall. Their set kept the crowd hyped up until around 2 am–and then there was silence’.
A reporter at the venue approached the show’s spokesperson, Larry Kwirirayi and when asked what was going on. He replied, ‘I have no idea what is going on or where Wizkid is, I have no further comments’.
There were also reports of violence at the venue as angry fans expressed their displeasure by throwing bottles on the empty stage and in the process destroying the electronic screens and lighting on the stage.
One of the reasons bandied round why Wizkid did not show up is that the show was poorly organized and as a result the attendance was very poor.
Angry fans could be heard hurling abuse at the artist and organizer for duping them. Since there was no official word on the reasons for the non-appearance by Wizkid several versions were clandestinely touted among them that the artist had refused to perform for such a small crowd, another one being that he could not perform in the cold and rainy weather and also that he was allegedly demanding his last bit of payment before jumping on stage.
Tags Nigeria Entertainment News wizkid zimbabwe
Previous Post Next Post