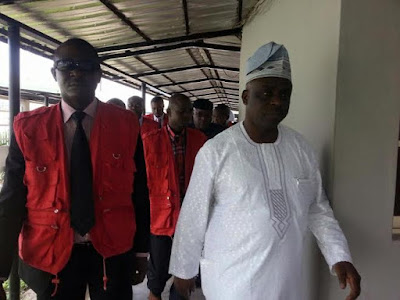 Ademola Amosu EFCC.Counsel to embattled Immediate Past Chief of Air Staff, Adesola Amosu, Bolaji Ayorinde (SAN), yesterday told the Federal High Court in Lagos that Amosu has returned a colossal sum from the N21 billion he allegedly laundered while in office. The colossal sum according to EFCC sources is put at N2.6 billion. Amosu's
counsel made this known while arguing his bail application during his arraignment.


“He has remitted colossal sums of money to the Federal Government, although not in admittance of guilt, but out of cooperation with security agencies. My application is that bail be granted to the first defendant on self-recognition. Let those terms be liberal. He has been reporting to the EFCC, sometimes twice a week. The first defendant will make himself available for trial,”he said.


I find it incredible that one man can steal so much money that was meant for the safe guarding of lives of citizens of Nigeria against Boko Haram.Truly incredible.These men should be jailed for life to make an example,but will that happen in Nigeria? Ieven if they are jailed,if another party assumes power,bet your life he will be pardoned.We saw some similar things done by Goodluck Jonathan.

His lawyer Chief Bolaji Ayorinde (SAN), while arguing Amosu’s bail application after he was arraigned before Justice Mohammed Idris, said his client had returned “collossal sums”.
Amosu returned N2.6billion to the Federal Government, The Nation learnt.
The Economic and Financial Crimes Commission (EFCC) arraigned him along with a former Chief of Accounts and Budgeting at the Nigeria Air Force, Air Vice Marshal Jacob Adigun, and a former Director of Finance and Budget, Air Commodore Olugbenga Gbadebo.
The companies arraigned with them are Delfina Oil and Gas Ltd, Mcallan Oil And Gas Ltd, Hebron Housing and Properties Company Ltd, Trapezites BDC, Fonds and Pricey Ltd, Deegee Oil and Gas Ltd, Timsegg Investment Ltd and Solomon Health Care Ltd.
EFCC accused them of converting N21billion from the Nigeria Air Force around March 5, 2014 in Lagos.
They were also accused of concealing “proceeds of crime” and thereby committed an offence contrary to Section 18(a) of the Money Laundering (Prohibition) (Amendment) Act, 2012 and punishable under Section 17(a).
Arguing the bail application, Ayorinde said his client, who pleaded not guilty, had always been cooperative with the prosecution since his arrest in January and would not jump bail.
“He has remitted colossal sums of money to the Federal Government, although not in admittance of guilt, but out of cooperation with security agencies.
“My application is that bail be granted to the first defendant on self-recognisance. Let those terms be liberal. He has been reporting to the EFCC, sometimes twice a week. The first defendant will make himself available for trial,” the Senior Advocate said.
Adigun’s lawyer, Mr Norrison Quakers (SAN), also urged the court to grant his client bail on liberal terms. “Incidentally, the second defendant is on administrative bail by the commission. He will be available for trial,” he said.
Gbadebo’s lawyer, Mr A. Etuokwu also asked for bail for his client. Prosecuting counsel, Rotimi Oyedepo, did not oppose the bail applications, but urged the court to make the terms stringent.

MEANWHILE,The Federal Government of Nigeria has commenced moves to seize two mansions in London UK allegedly belonging to the immediate past Chief of Air Staff, Air Marshal Adesola Amosu (retd.); and a former Chief of Accounts and Budgeting in the Nigerian Air Force, Air Vice Marshal Jacob Adigun.
The PUNCH on Wednesday learnt that the Economic and Financial Crimes Commission had traced two houses in the highbrow areas of London to Amosu and Adigun.
An impeccable source told our correspondent that Amosu and Adigun, who are due to be arraigned for alleged N21bn fraud, purchased the houses in 2014.
“We identified a detached house at 93b Shirehall Park, London, NW42QU, belonging to Adigun. The house was bought at the cost of £875,000 (N333,375,000) while we traced another house to 50 Tenterden Grove, NW41TH, belonging to Amosu. The house was bought at over £1m (N381m),” the source added.
However, investigations by our correspondent showed that the value of the houses had increased.
Our correspondent, who visited Zoopla.co.uk, which real estate agents use in valuing properties in the UK, showed that both properties were bought in August 2014.
According to the website, the property which Adigun allegedly bought in August 2014 at the cost of £875,000 currently goes for £1,046,000 (N398,526,000).
It adds that Amosu’s property, which it said was purchased in November 2014 at £1,850,000, (and not £1m as claimed by the EFCC) is now worth £2,175,000 (N828, 675, 000).
According to the property website, Amosu’s property has six bedrooms, six bathrooms and two sitting rooms.
A source at the EFCC told our correspondent that the Federal Government, through the Office of the Attorney General of the Federation, would write to the government of the United Kingdom to assist in seizing the properties, which were allegedly bought with Nigerian taxpayers’ money.
He said, “What we are seeking is how to seize the properties through diplomatic means. It is a process known as Mutual Legal Treaty Assistance.”
According to the UK media, a large number of mansions in the country are owned by corrupt Nigerians.
In a May 2016 report entitled ‘Palaces of Corruption’, The UK Daily Mail unveiled the London mansions of deceased former Governor of Bayelsa State, Diepreye Alamieyeseigha; another dead ex-governor, Abubakar Audu of Kogi State, and convicted ex-Governor of Delta State, Mr. James Ibori.
Tags corruption in Nigeria efcc news latest news in Nigeria
Previous Post Next Post