byNaija Blog Queen Olofofo -June 08, 2016
0
Is Henrietta Kosoko dead was the question across thousands of Yoruba fulm lovers lips when they first heard of the death of the actress.Henrietta Kosoko  died on Monday, June 6, 2016,and her husband Prince Jide Kosoko as well as Henrietta Kosoko Children have spoken of their devastation at the news.In a rather shocking revelation,the husband revealed this was the third wife that he would lose to the cold hands of death.Most painfully was the fact that Jide was out at a social function when he heard of the news of his wife's death and he thought it was nothing but a rumour.
Encomium Weekly paid a condolence visit to her Lagos residence at 4, Olanrewaju Street,
Chemist Bus-stop, Bariga, Lagos, on Tuesday, June 7, 2016. The atmosphere was still pensive at the time of our visit at 2:10pm. Lots of mourners within and outside the residence kept coming to commiserate with the family. All efforts to get the attention of the family members proved abortive as none was willing to narrate the ordeal .

Late Nollywood actress Henrietta Kosoko had a set of twin Taiwo and Kehinde Olowu from her previous marriage before she met and married Prince Jide Kosoko. Taiye is a fast rising Afro pop singer popularly known as LT and Kehinde who like his late um and twin brother is into entertainment is a force to reckon with in music production.
Bidemi Kosoko, daughter of the widower, Prince Jide Kosoko told ENCOMIUM Weekly, “The Kosoko family are not in a good mood to address the press as you can see. I will be glad if you can suspend your activities until the family is ready to attend to the press.” 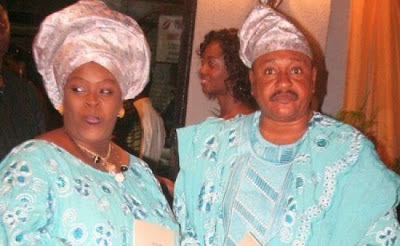 In a tribute to her stepmother Henrietta Kosoko,Bidemi wrote,“Still can’t believe u are gone,u ask me to get u somtins frm Dubai which I did,u ask me just last week dat wen am I comin to drop dem for u nd I said dis week I ll com over. Now u are gone just lik dat,u dint even wait to collect dem .ll miss u so much,our fight,our gist,ur prayers,u praising me al d Tim,ur advice.U even talk about all d tins U ll do on my wedding day u AV been on my neck with dis marriage issue u did not wait for dat day to com nd u left.rest on “Omo odudu kudu”.God pls save her soul nd forgive her of her sins (amen)”

Nollywood actors, actresses, marketers and friends were present. The widower was looking distraughtas he was talking in a way that reflected shock and confusion about his wife’s death.
The death of his wife Henrietta caught him unawares. “I went to a particular event on Monday (June 6), I was not aware that my wife was dead until the person that was with me asked me to check the rumours flying around the social media about my wife’s death. I referred to it as rumour because I still didn’t believe, if not until I confirmed it myself.
“I don’t know how to explain the situation. It is an unimaginable loss,” Prince Jide Kosoko said this while sitting with colleagues and movie marketers discussing and lamenting.
“Third wife! Won’t the world count the numbers of lives I have lost? ” he said this in a sober mood when discussing with colleagues.
During the chat, one of the movie marketers was overheard saying, “What kind of a thing is this at this time? This is a big loss to the family and Nollywood as a whole.”
Also, friends and colleagues who were present at the time of our visit described late Henrietta Kosoko as a great woman with positive influence to the society as a whole.
A neighbour who spoke on the condition of anonymity said, “I was shocked when I heard the news. I was aware she was admitted to the hospital days before her death, but no one could ever imagine it will lead to her death. She was such a wonderful mother, not to only her family but the whole nation will miss her.”
Her twin boys which she had before getting married to Prince Jide Kosoko were also present but unable to speak about the ugly incident.
At the time we left the scene at 3:15pm, sympathizers kept coming. Nollywood actors and actresses were present before we left the scene.
Tags Nigeria Entertainment News Nollywood yoruba actress
Previous Post Next Post