byNaija Blog Queen Olofofo -July 08, 2016
0
Kemi Olunloyo latest news:The controversial social media personality deported from Canada to Nigeria, has been a thorn in many people's flesh,she has had clashes just with about every body worth mentioning,she even had a fall out with her own father,denying him publicly and labeling him with accusations like ritual practise.You must have at one time or the other come across the Kemi Olunloyo and Pastor Adeboye story. She accused him of being a muderer.She said, “Pastor Adeboye killed a cop in 1971. I’m saying this in front of a camera. I have always posted it on Facebook and Twitter but I am saying it on camera now.

“He thought he was shooting an armed robber in his house but it was actually a cop that
broke in and he got killed.

“That’s why I call him a murderer; If you murder somebody, you will continue to be a murderer; he is a murderer,” the 51-year-old activist stated.
However, when asked why she was making the ‘weird claim’, Kemi said, “Pastor Adeboye said if you are single mother, you have no worth.
“He said it in one of his speeches in his church and that’s the real reasons I went after him.
And then there was the Olamide story,where she labelled the Nigerian musician a ritualist.She said that was how he got his success,lol.
Then there is her spat with fellow blogger Tokunbo Aboderin where the called each other all sorts of names and basically made a fool of themselves on social media.Then there was Jide Kosoko who was accused to have been responsible for the death of his late wife Henrietta Kosoko,the reason for this according to Kemi was,he had lost 2 wives previously,so he should be questioned.I could name more people,they go on and on,theres Linda Ikeji,Eniola Badmus and loads.
I had been aware of Kemi a long time ago on social media.In those days she lived in Canada.But what i remembered was this woman whom all she ever did was bash Nigerians.You will not believe the things she used to say in those days about Nigeria and Nigerians.Little did she know she would be deported back to tha very country she thought she was rid of.


According to what i understand,she picked a fight with a group on social media who in return waged a war against her.They dug out the fact that Kemi had resided in the United States for nearly three decades and was denied permanent residence status therein purely because of her serial criminal acts. This formidable team discovered she had served a jail term in the tiny Caribbean Island nation of Jamaica, using an alias.Directly on indirectl,this led to her deportation from Canada.
Reacting to all this,she said at the time of her impending deportation-“This is very frustrating,” Omololu-Olunloyo said from her Toronto home. “Nobody knows what will happen to us when we are deported to Nigeria.”
“I know I will be killed when I return for what I have written against the government,” she added.Omololu-Olunloyo said some of her blogs and tweets have been against the government of Nigeria.“I am a journalist and it will be only a matter of time before I am killed. The government do not like people who ask a lot of questions,” Well,she has been back in Nigeria for 3 years or more now and she is still very much alive.
Speaking later on her deportation,Kemi revealed that since her reaching Nigeria, many people in the Toronto community where she served as the voice of the voiceless have contacted her to reveal that her outspokenness and strong campaigns against guns and passionate   fight for control, especially her views on the scrapped Canadian Federal Gun Registry had not gone down well with hardcore Canadians, and may have engendered her panned exit from the country.
In more recent news,it was reported that former governor of Oyo state Victor Omololu Olunloyo had denounced his daughter Kemi Olunloyo for her erratic behaviour, stating that she had a history of mental illness and she was a constant source of embarrassment to the family.
Mr Victor has come out to deny ever making available any statement to Premium Times denouncing his beloved daughter. He released the statement via his Facebook page.


TO ALL NIGERIANS ON SOCIAL MEDIA
I have NOT released any statement of any kind about my daughter Kemi Omololu-Olunloyo denouncing her social media posts. There is a fake statement floating around websites which I learned about. I did not release any statement to Premium Times.

Some of the contents are absolutely false. She has never been to Ireland nor landed in jail anywhere where the late Okunade Sijuwade had to bail her out. There is an Aboderin character that I have learned about whom I'm told is impersonating her on Instagram and other social media platforms attacking our family. A similar letter purported to have been written to Aboderin by me is also false. If anyone paid attention to my 2013 Punch newspapers interview, I commended Kemi's views on social media telling the reporter Atoyebi "Kemi's views are her views, you can't change her."

I am not aware of Kemi's decision to quit reporting Nigerian news until now so she is NOT responding to my fake statement floating ut there.

Please disregard the endless impersonation and degrading of the Olunloyo family. I am not a fan of social media and this Facebook page was opened because of the rumors that circulated the internet during my 2010 illness saying that I was DEAD. This page serves the purpose of ending such rumours. Once again, I did NOT send out any statement regarding my daughter on social media. My number is public and any credible media outlet calls me for interviews not statements.

In case you missed the letter her father Victor Omololu Olunloyo was meant to have written,here it is in its entirety. 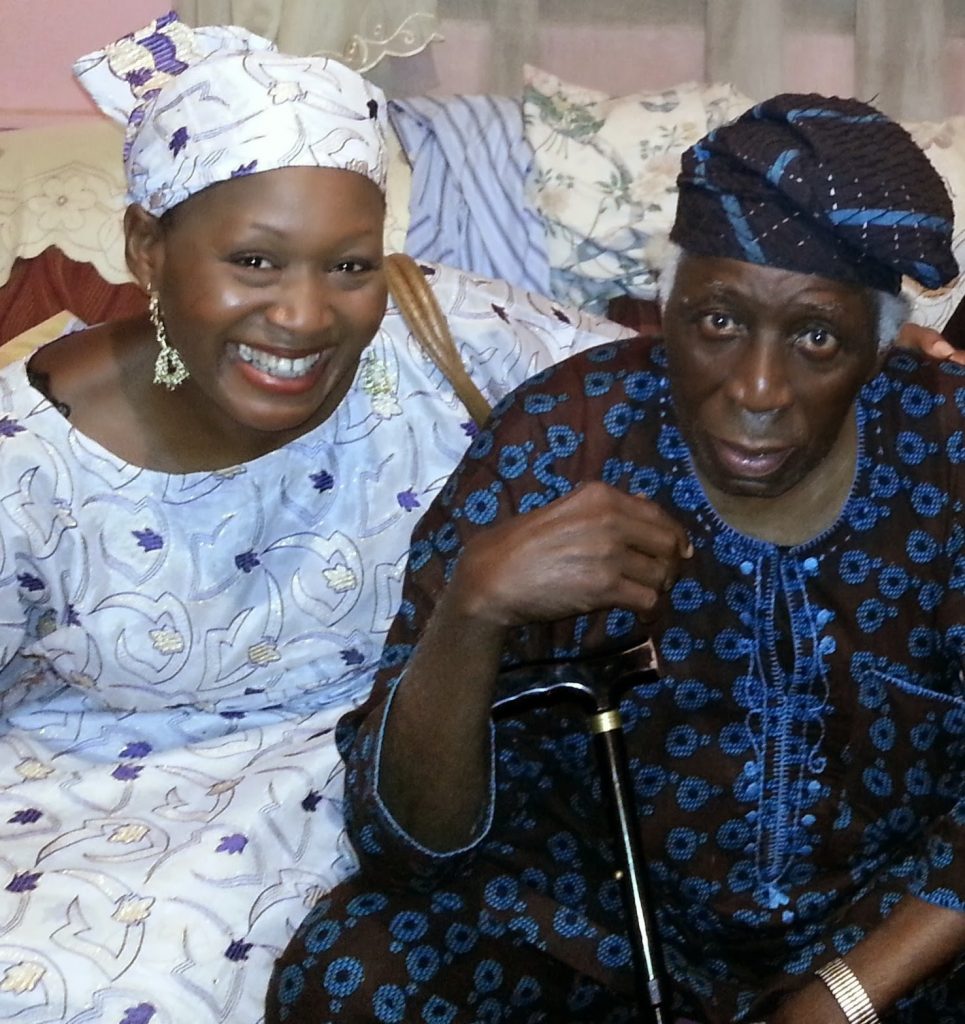 “I would like to apologise without reservation to all persons affected. I hope and pray they would graciously accept the apology,” he wrote.Mr. Olunloyo, who was a governor under the banner of the defunct National Party of Nigeria (NPN), said even her family is not safe from Kemi’s public attacks. He specifically mentioned and apologised for Kemi’s attack on former President Olusegun Obasanjo, the General Overseer of the Redeemed Christian Church of God, Enoch Adeboye, the General Oversea of Winners Chapel, David Oyedepo, and the founder of the Synagogue Church of all Nations, Temitope Joshua.He also denounced her attack on foremost Nollywood actor, Jide Kosoko, who Kemi had called a ritualist after the recent demise of his third wife.“There seems to be a curious pair of writers, an Aboderin resident in Ireland and Kemi Olunloyo, who sometimes curiously act separately and sometimes in union. Some of their most unfortunate victims are their half siblings.“Others of higher status in the society (like) ex-president Obasanjo and quite recently, clergy men with large respectable following, such as the General Oversea of Redeemed Christian Church of God, Pastor E.A Adeboye, a brilliant fellow mathematician, an inspired Bishop Oyedepo, the inimitable Reverend T.B Joshua, all learned men.

“She includes me, her father. All four of us she dubs ritualists. Of course, none of us, as far as I know, is anything of sort. She has gone so far as to accuse us of various sexual crimes and gone too far to give social media itself a very dubious name, in term of uncontrolled freedom to assault others,” the frmer governor, a mathematician, said.

Mr. Ololunyo said Kemi’s “erratic” behaviour had put her in trouble in Ireland and in the United States, and the late Ooni of Ife, Okunade Sijuwade, once bailed her out of jail, Premium Times reports.“Of Late, in the last four weeks or so, she had had the audacity to pass irrelevant and hopeless comments on one of our national talented artists, prince Jide Kosoko, whom I admire so much, calling him a black widower as he has unfortunately lost three wives.“I had thought at 52, Kemi will further train her mind and cease to be an embarrassment to herself and member of her nuclear, extended family and to the general public. I thank pastors and psychiatrists like Dr. Lasebikan, who had gone to great lengths at their own personal cost to restrain her from excesses and recklessness. I dissociate myself entirely form her conducts and statements.“She must accept responsibility for her actions and utterances as well as the consequences. My condemnation is total and not in any instance defensible. My position is absolutely clear. She has gone too far and needlessly so,” he wrote.

Kemi Olunloyo never ceases to amaze me,i really don't think she is all up there,cos some of the things she comes up with or says about people,is just out of this world.I actually believed the letter from her father was real when i first read it.Maybe it is,maybe it is not.Maybe the father wrote it and then changed his mind later,maybe he didn't ,we will never know.Kemi's press release that she is quitting journalism and social media.
Meanwhile earlier, in an apparent reaction to her father’s statement, Ms. Olunloyo yesterday published her own statement to her “fans” on social media saying she will “no longer practice journalism in Nigeria” and would now focus on her Kemi Kid's Foundation. Read her full statement....


Today July 7th 2016, I am really SORRY to tell you my fans that I will no longer practice Journalism in Nigeria. It seems like many celebrities and their fans are upset when I write a story about them. I live for the truth and nothing more. News is news and not prying into other people's business. Without news you are uninformed. I opened this Facebook page January 25th 2013 and wanna thank everyone who has followed me on social media.

I will now concentrate on my Kemi's Kids Foundation. I like helping disadvantaged kids
in Nigeria. Pls LIKE the page Facebook.com/Kemiskids. If you follow me on Twitter @KemiOlunloyo is my private page @HNNAfrica my main handle will be there. Facebook.com/KemiOlunloyo is my fan club started by some loyal fans.
Once again I apologize to all Nigerian celebrities and their fans who felt offended by my stories. They are true investigative stories and the bitter truth!

I am now moving on.

I will also be canceling my social media tour in Nigeria. Facebook has changed my page description to Public Figure instead of Journalist as I notified them. There are lots of bloggers and newspapers that can report those stories. Try Sahara Reporters, Breaking Times, Cable NG and Premium Times, Pulse Nigeria, Naij, Daily Post. Don't forget your local newspapers. Nobody has forced me off Journalism on social media. It was my choice. I will never change for anybody. I will be keeping to myself and continue writing for the various foreign media on their platforms. I write online as admin for 4 American TV stations and 2 newspapers.

Thank You, Pls share and I love you all.

Hahahahaha,the woman is something else,so full of herself.You would have thought this was a letter written by Obama the way she worded it.She even said her loyal fans opened a Facebook for her,lol .I give her 2 weeks,and like a bored or broke boxer,she will be back as a so called journalist disturbing the peace of social media and the nation.