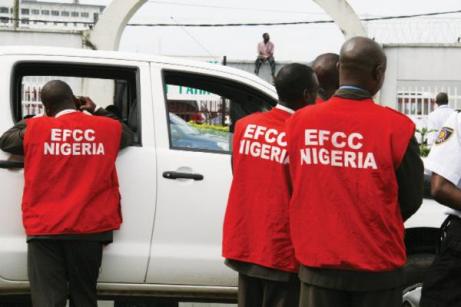 Latest EFCC news.The Economic and Financial Crimes Commission (EFCC) has laid its hands on a bank account with over N2.5billion opened in the name of a former female minister’s housemaid.
I guess it doesn't take a genius to figure out who the said female minister is.I mean,how female ministers do we have in Nigeria anyway? And how many have constantly been in the news on corruption allegations? I will leave you to figure that out.
According to the Nation, investigators of the anti-graft agency believe the account was
opened by the former influential minister in the name of the housemaid as part of the effort to cover her track.
However, preliminary investigation has shown that the former minister  is the sole signatory to the account, The Nation gathered authoritatively yesterday.
A highly placed EFCC source said

“Our findings indicated that the ex-female minister opened an account in the name of her housemaid and with her photograph. But the signature in the account is that of the ex-minister,” the source said.
“At the time we made the discovery, over N2.5billion was in the account. But the volume of transactions in the account has been huge.
“We are suspecting that the ex-minister did not put the housemaid in the picture of what she wanted to do with her passport photograph.

“We have established that the ex-minister has been drawing funds from the said account. We have retrieved records of all transactions by the ex-Minister. We will soon bring her to justice no matter how long it takes to follow due process.”