byNaija Blog Queen Olofofo -July 18, 2016
0
The fight between Dino Melaye and Remi Tinubu is laughable.Is this what these guys do with their mandate?This is what little kids should do and be told off by the elderly ones.Remi Tinubu called for protection from the Nigeria police,saying Dino Melaye was after his life.
Melaye has replied by alleging that Senator Remi Tinubu has released N75 million to sponsor a protest against him.

Senator Oluremi Tinubu applied for police protection, following her issues with Dino Melaye. In a letter dated July 18 and received same date by the office of the Inspector General of Police, Ibrahim Idris, Mrs Tinubu said her life was no longer safe following her fight with Senator Melaye. The letter entitled: Request for Police Protection’ reads:
"I am Senator Oluremi Tinubu, representing the Lagos Central Senatorial District of the Federal Republic of Nigeria.

"During the proceedings of the Senate on Tuesday, July, 14, 2016, I had cause to contribute to a matter of national importance. Apparently dissatisfied with my contributions, Senator Dino Melaye threw caution to the winds, resorted to vulgar abuse of my person and wanted to assault me.

"It was the timely intervention of a number of colleagues which prevented Senator Melaye from unleashing physical attack on me. However, as the leadership of the Senate did not call him to order in the circumstance, he proceeded to threaten my life without any provocation whatsoever.

"In view of Senator Melaye’s antecedent particularly in the House of Representatives where a brawl led to the untimely death of a member, I have decided not to ignore his threat to my life. Therefore, I'm compelled to urge you to use your good offices to provide me with adequate security.

"Please accept the assurances of my regards and esteem." 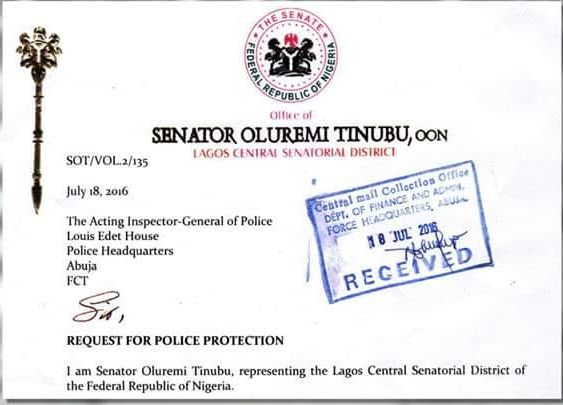 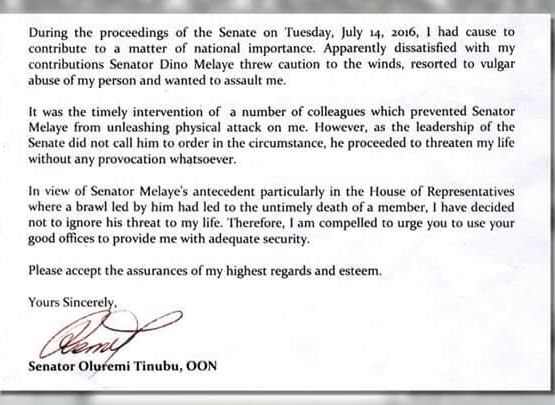 On Melaye's part,he made the allegation in a post on his Facebook wall this evening. He wrote;


A civil rights movement, Committee for the Defence of Women's Rights, has uncovered a plan by the wife of a former governor of Lagos State and chairman, Senate Committee on Women Affairs, Mrs. Oluremi Tinubu to sponsor a protest against Senator Dino Melaye this coming Wednesday in Abuja.

The organisation said she has released N75 million to Lagos State APC Woman Leader, Mrs. Kemi Nelson through one of her sisters simply identified as Funlola. The National President of CDWR, Prof. Taibat Majekodunmi, made the revelation in a statement issued on Monday in Abuja. Already, the protesters have stormed Abuja and have booked for 300 rooms in many Hotels in hotels in Abuja. She said, "We have it on good authority that N75 million has been released by Senator Okuremi Tinubu to Mrs. Kemi Nelson through Mrs. Tinubu's sister called Funlola.The money is to organise a protest in Abuja on Wednesday against the chairman, Denate Committee on the Federal Capital Territory (FCT), Dino Melaye, with 1,000 protesters from Lagos. "The protesters have booked for 300 rooms in some in hotels in Abuja. Why did she not organise a protest against the hardship of Nigerian women and widows.As we speak, Alade market in Ogba area of Lagos has been destroyed and all the women rendered shopless. Oluremi Tinubu did not organise protest about that. "Against the provisions of the constitution of the All Progressives Congress (APC), Kemi Nelson doubles at the State APC Women leader in Lagos and also the zonal women leader of APC in the South West. This will show her greediness and why the Tinubu dynasty has taken over Lagos."Women were killed in Kano and Abuja and Mrs. Tinubu is the chairman, Senate Committee on Women Affairs. She did not organise protest over these killings. Mrs. Tinubu has not protested against the skyrocketed price of tomatoes in the market. In the same vein, kerosine is now over N200 per litre and she didn't organised any protest to that effect."Instead, she has taken advantage of the prevailing poverty in the land to hire hungry women in the land to partake in an unproductive protest against Dino Melaye. Women like Funmilayo Ransome Kuti, Hajiya Gambosa Sawaba, Sarah Jubril, fought for woman race without attacking any man. Mrs.Oluremi Tinubu should emulate the likes of Margaret Thatcher, Indira Ghandhi, Benazir Bhutto and our own dear Dora Akunyili. "You can imagine what N75 million will do in the lives of widows and hungry Nigerian women. We dare Mrs. Tinubu to go ahead with her planned N75 million protest in Abuja. We will also mobilise Nigerian women against this ostentatious display of wealth while the average Nigerian women wallow in abject poverty."

This is beyond a joke,somebody needs to call these two to other.To say they are setting a bad example is an understatement.
Tags nigeria politics
Previous Post Next Post