byNaija Blog Queen Olofofo -August 14, 2016
0
Monica Puig,wrote her name in the Puerto Rico history books when she won the first individual Gold for her country at the Rio Olympics. The unheralded Puerto Rican who has been tearing through the women’s singles draw like a dagger through silk, became the first Olympic individual gold medallist in her country’s history when she beat the second seed Angelique Kerber in a thrilling three-set final on Saturday night.
The clean-hitting 22-year-old Puig with the cool demeanour played way above her WTA
34th ranking to reach the final, putting out the grand slam champions Garbiñe Muguruza and Petra Kvitova as well as 14th seed Anastasia Pavlyuchenkova, and she finished the job in style, beating Kerber 6-4, 4-6, 6-1 in two hours and nine minutes.
In an almost unbearable climax, she saved six break points and had four match points before forcing her illustrious rival to shove a closing forehand into the tramlines, and turned in a state of disbelief to accept the acclaim of her fans. Only the boxer Luis Ortiz and wrestler Jaime Espinal had reached Olympic finals for Puerto Rico before. Both took home silver.
Puig broke twice in the first set to shock her strongly fancied opponent, and her raucous supporters, draped in their country’s colours, sang and danced as if it were carnival time when she broke back to four-all in the second. Puig saved four set points, but not a fourth, and they went to the decider. 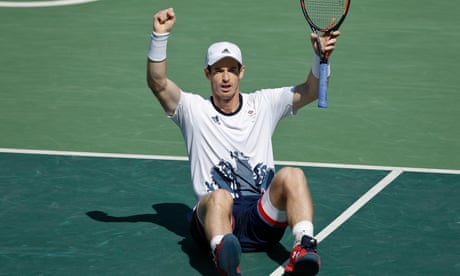 Read more
The underdog with the big game and keen tennis brain raced to a 2-0 lead and kept her composure after falling heavily in the third game to fight through deuce to hold. All the anxiety shifted towards Kerber, whose tennis collapsed against an opponent with her gaze fixed on history.
Kvitova – whom Puig beat in three sets on Friday – rescued her Olympics with a bronze, beating the American Madison Keys 7-5, 2-6, 6-2 in two hours and 12 minutes.
Kvitova’s compatriots, Lucia Safarova and Barbora Strycova, also collected bronze in the women’s doubles, beating the other Czech entrants and sixth seeds, Andrea Hlavackova and Lucie Hradecka, 7-5, 6-1.
Hlavackova deserved gold for even getting on court. She was hit in the eye by Martina Hingis in the semi-final and was taken to hospital. “I went to bed at 5am because I spent five hours in hospital having a CT scan and finding out I have a orbital fracture in my face,” she said. “It’s not something you go to sleep easy on.
“There was a 90% chance that I was not going to play. At 1pm when I tried to move around, they taped it well and I decided to go for it and try. I was very worried going into the match; we couldn’t really perform, and that’s the most painful part.
“They’re debating about having surgery, and I really hope that’s not going to happen.”
Although she is friendly with Hingis, she thought the Swiss could have avoided hitting her. “Right after the match I had the opinion that it happens,” Hlavackova said. “It’s fine. But, when I saw the video, I actually doubted a little bit. I think it was quite a hard attack. Nothing personal – I have a really good relationship with Martina – but, in all the world, she is one of the players who knows where to put the ball.
“When I saw the space that was around me, I have to admit she could have put it away, and also reacted a little bit more personal. She was more worried about my not getting a medical timeout than about my eye.”
The fourth seeds Sania Mirza and Rohan Bopanna, of India, who put out Andy Murray and Heather Watson in straight sets on Friday night, won their mixed doubles semi-final against the Americans Venus Williams and Rajeev Ram 6-2, 2-6 (10-3) in the champion’s tie-break.
Some of these might have been bordering on so-what matches in the grander scheme of things – and were played out in front of relatively small crowds on the second court, but, at an Olympics where quite a few athletes did not even want to come across several sports, they were no doubt grateful for their trinkets and the experience.
Story source
Tags Angelique Kerber and monica puig olympics 2016 Sports
Previous Post Next Post