Pete Burns Dead or Alive dies at 57 and cause of death is heart attack!

Pete Burns Dead or Alive dies at 57 and cause of death is heart attack! 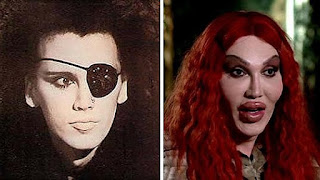 Oh my God! Pete Burns death is a continued loss of great stars in 2016.I don't think we have ever known a year like this.How terrible! I am still in a shock! How could Pete Burns be dead?
According to his management,Pete's cause of death was a cardiac arrest.The androgynous star died on Sunday but we have not been given the full details of where and how the cardiac arrest came about.
Poor Pete,i guess all that surgery finally took a toll on his heart.So sad.

I remember as a kid watching TV when this man came on dressed like a modern day Boy George singling his classic hit song,You spin me right round like a record.It was so catchy and it was a
massive hit.
I think this was 1955 or thereabouts.He looks so different to what was going on then with his black eye patch,funny dancing and flowing gown.

Then a slow spiral into an addiction with plastic surgery began for Pete.Very soon the talented singer became unrecognisable and it seemed every time i saw him he looked worse than the last.

His band Dead or Alive now became a secondary focus,nobody talked about the music anymore,but instead talked about the once famous singer who was now a plastic surgery freak! We heard all the stories about his lips exploding,suing plastic surgeons for botched surgeries and so on.Whne you see the Pete Burns before surgery photos,it was truly a remarkable and scary transformation.

I guess it was his androgynous nature that led him to be seen in places like Celebrity get me out of here,Big Brother,Pete was supposed to be on stage doing what he was best at.


I really hope all this won't be Pete Burn's legacy.I hope on the way they stop to think he was actually a talented musician who once made great music.I still can't believe Pete Burns is dead.But its been one of those years,the dead celebrities 2016 is a sad list-we lost Prince,Davis Gest,Victoria
Wood,Ronnie Corbett,Paul Daniels,Terry Wogan,David Bowie.

Pete Burns was 57 years old when he died.His sexuality was often talked about.People often talked about him being gay mainly because of his image..He was a very androgynous looking man.But he was indeed gay and was married briefly to a man.The name of the man who was Pete Burns husband is Michael Simpson.He was once married though to a woman Lynn Corlett between 1978 and 2006.He was married to his ex wife for 28 years before they got divorced.

RIP mate,you sure took us on a ride and you did spin me right round like a record.