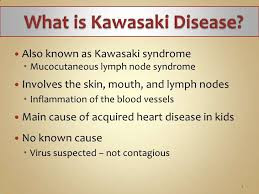 Kawasaki disease facts:Kawasaki disease that is also known as  mucocutaneous lymph node syndrome, is a condition that mainly affects children that are under the age of five. The symptoms to look for are a high temperature that lasts for 5 days or more, with a rash and swollen glands in the neck.

Is there a link with Covid 19?well,WHO chief scientist Dr Soumya Swaminathan has said there is still no clear link between coronavirus and the disease

Is it contagious?It isn't contagious and it cannot be passed from one person to another. So this rules out the likeliness that it is caused by a virus alone.It can affect children of any age,but it is more serious in children under the age of 1.

What are the causes?:In the United states of America for example,it is the primary cause of acquired heart disease in children. Although the cause of the disease is unknown, it is widely thought to be due to infection or an abnormal immune response to infection.
But scientists  haven't found an exact cause for it yet. It might be linked to genes, viruses, bacteria, and other things in the world around a child, such as chemicals and irritants.

Can you get it again after cure?Recurrence is rare and occurs most commonly in children. Atypical presentation, incomplete disease, short duration of fever, and reduced response to IVIG treatment were found to be the risk factors for recurrence.It can occasionally present with clinical and radiographic findings of deep neck bacterial infection.

Does it affect the brain?It can cause a type of meningitis (inflammation of membranes covering the brain and spinal cord). It can also cause inflammation in the skin, eyes, lungs, lymph nodes, joints and mouth.

Is it physically painful?:Well,amongst children,it can be.Your child may have a lot of pain from the fever, swelling, and skin problems. Their doctor might prescribe medication to make them feel better, such as aspirin and drugs that prevent blood clots.

Is there a cure?Even though Kawasaki has scary effects such as a high fever and peeling skin,the good news is that,it is usually treatable, and most children recover from it without serious problems.

Can adults get it? It can occur in adults, but the presentation may differ from that observed in children. Typical findings in both adults and children include fever, conjunctivitis, pharyngitis, and skin erythema progressing to a desquamating rash on the palms and soles. 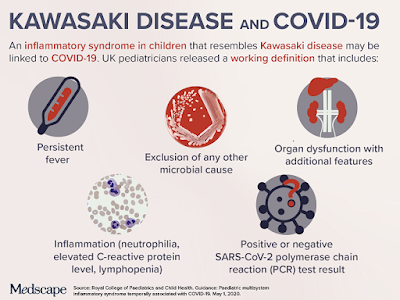 How long is the treatment for it?Children may be given aspirin, as well, to lower the risk of heart problems. Children stay in the hospital for at least 24 hours after completing the IVIG dose to make sure the fever does not return and other symptoms are improving.

Can it go away by itself?It is an illness that makes the blood vessels in the body swell and become inflamed.The symptoms often go away on their own, and the child recovers.However without medical evaluation and treatment however, serious complications may develop and not be initially recognized.So it is better to be safe and seek treatment once you see signs or symptoms.

Is it genetic or runs in families? A predisposition to Kawasaki disease appears to be passed through generations in families, but the inheritance pattern is unknown. Children of parents who have had it have twice the risk of developing the disorder compared to the general population.

How does it affect a child in later life?Sadly,if your child has had heart complications as a result of Kawasaki, they have an increased risk of developing cardiovascular complications later in life. This includes conditions such as heart attacks and heart disease.

Is it the same as the hand foot and mouth disease?The rash itself is not contagious. The virus may also cause small, tender blisters and red spots on the palms, soles of the feet, and inside the mouth. ... This condition is known as hand-foot-mouth disease (HFMD) and is caused by group A coxsackievirus. HFMD is most common in children under 10 years of age.

How long does the disease last for? It lasts for several weeks, progressing through three different stages: Acute phase - This is the most intense part of the illness, when symptoms are most severe. It usually lasts one to two weeks. Subacute phase - This stage begins when the child's fever, rash and swollen lymph nodes go away
Tags corona virus medical science news
Previous Post Next Post