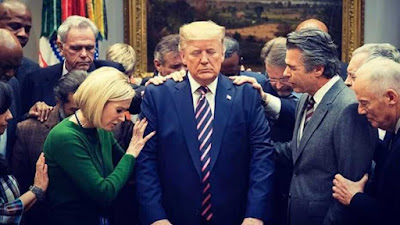 Donald Trump,the president of the US,has ordered governors to open up places of worship opining that it is wrong for some state governors to designate 'liquor stores and abortion clinics' as 'essential services' but keep places of worship like churches, mosques and synagogues closed.
I think Trump has got this wrong totally.You can't compare the amount of people that converge in a church to the numbers that will be in a hospital or abortion clinic.Those places as well are places where you can observe social distancing and determine how many people can be where.
A church or worship centres are a different case entirely.You have hundreds close
together,in some cases thousands.Another thing is,an abortion is something that cannot be postponed,depending on the issue at hand.A church or mosque will always be there.And you can worship from home anyway.

I just feel all these is being heavily politicised and we are forgetting that peoples lives are at stake here.
Votes and the economy are not as important as the lives of citizens.

Now back to Mr Trump.Amid the Coronavirus pandemic hat has killed over 95,000 people in the US, Trump on Friday said he is designating all places of worship – including churches, synagogues and mosques – "essential," saying he wants them to "open right now."

Trump appeared in the briefing room to read a short statement announcing he has approved guidelines from the Centers for Disease Control and Prevention to help state and local leaders safely allow worship facilities to open back up.

A large chunk of Mr Trump's political base is very religious. In the 2016 election, Trump notably took 75 per cent of the white evangelical vote and has invited pastors and preachers during his tenure to lead prayer sessions at the White House.