How Mudashiru Obasa was cleared by corruption panel

How Mudashiru Obasa was cleared by corruption panel 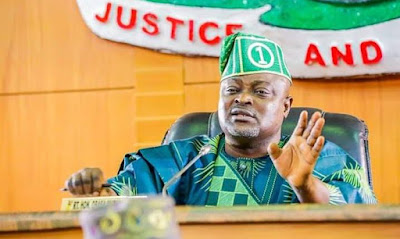 Mudashiru Obasa the Lagos state house of assembly speaker,has been cleared of the corruption allegation levelled against him.Obasa's corruption trial had been presided over by a 9 man panel.

Victor Akande, the representative of Ojo constituency 1 and chairman of the nine-man fact-finding panel which probed Obasa, said all the corruption allegations made against the
speaker were “frivolous" during the presentation of his panel's report on Monday June 8.

The panel which recommended that the clerk of the house Azeez Sanni should investigate how documents which led to the allegations against the speaker were leaked, maintained that Obasa followed due process in disbursements of funds.
What i don't understand is why they are so keen to investigate who leaked the documents.This suggests,if there was any wrongdoings in the house,they don't want it exposed.They should not worry about who exposed the documents,what they should worry about is,why someone deemed it fit to leak the documents.
Also,the person who leaked the documents must have known that there was something damaging there,otherwise why leak it?Also if those documents were details that are in order,why are they hidden?The details should be made available to the public at anytime.
I would leave you reader to work this out yourself and see what you think.
Speaking further,the chairman of the panel Akande said;

“We also recommend that the activities of the house should be digitalised for proper record keeping and monitoring.
“It was then suggested by the committee that a vote of confidence should be passed in the speaker of the house.
“The speaker did not have multiple accounts with Ecobank, the BVN ascribed to Wema Bank does not belong to him and the companies attributed to him in Wema Bank is not correct.”

The panel's clearance of Obasa was put to a voice vote by the house's majority leader Sanai Agunbiade, and was unanimously adopted by the lawmakers.
Tags lagos state news Nigeria Nigerian news Politics
Previous Post Next Post