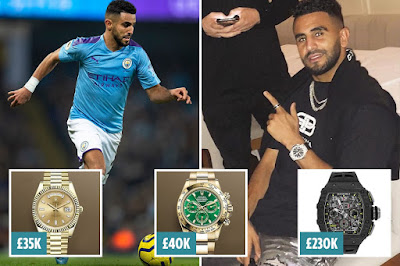 Riyad Mahrez robbery:The Manchester City and Algerian winger,  has become the latest footballer to be targeted by thieves during a £500,000 raid at his penthouse.

According to the Sun, the burglars carefully tracked 29 year old Mahrez,before they broke into his penthouse and got hold of a key fob to gain access.

A Greater Manchester Police spokeswoman said of the raid on Mahrez: 'At around 5pm on Friday April 24, police were called to reports that four separate apartments had been burgled at a city centre block.'

A letter sent to residents said: “Four apartments were accessed without authority using a fob which had general access throughout the building.

“The fob in question is now in our possession, has been fully deactivated and cannot be used again.”