Odion Ighalo wants to play for Nigeria again after retirement

Odion Ighalo wants to play for Nigeria again after retirement 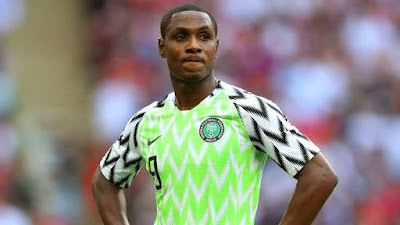 Odion Ighalo,says he may play for Nigeria again after announcing his retirement from the Super Eagles,when the last cup of Nations where he was top scorer ended.
The Manchester United striker said, having to travel the distance between China where he played for Shanghai Shenhua to Nigeria for national duty was affecting him so he had to retire to allow the young ones take over.


Ighalo has since moved to England,where he joined his boyhood team, Manchester United on loan and recently extended his loan deal with the Old Trafford outfit until January 2021.
Since he announced his retirement, Victor Osimhen has been leading the Super Eagles attack with the forward scoring three goals during the 2021 Africa Cup of Nations qualifying games against the Republic of Benin and Lesotho.
Ighalo has now revealed that he has not given up on returning to the Super Eagles team.
“I am still in contact with Gernot Rohr and Amaju Pinnick, and they congratulated me on my loan deal,” Ighalo told Brila FM.
“I am still thinking about returning to the national team, but right now I want to concentrate on my club career.
“I left the national team because of the distance between Nigeria and China, but now that I am in Manchester and just like life and in my career, you never can tell."
Tags Entertainment football Nigeria Entertainment News nigerian entertainment Sports
Previous Post Next Post