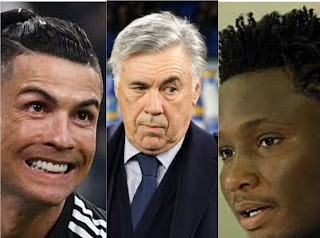 Carlo Ancelotti has named his all time first 11 football team,but surprisingly left out Cristiano who he coached at Real Madrid.Ancelotti has been a coach at Chelsea, Juventus, Real Madrid and Everton in his illustrious career.

The Italian Ancelotti, speaks 6 languages and his coaching career has spanned over two decades with lots of trophies and medals to show for it. He coached Oliseh at Juventus during the 1999/2000 season before his two year spell at Chelsea where he coached Mikel
and won the Premier league and FA Cup titles.

I find it quite strange though that he has left Cristiano Ronaldo out of his team,the best players of the last 40 years ,are undoubtedly Ronaldo and Messi.I don't care who you afre,those two will always come out top.So my suspicions here is that something happned between Ancelotti and Ronaldo,and this is the Italian's way of getting his back.Cos trust me,Ronaldo will be fuming at this list,he wants to be Number 1 at everything.
Who knows,Cristiano might even haave had a hand in Ancelotti getting sacked at Real Madrid.


The list of players Ancelotti has coached,also excludes Filipo Inzaghi and Del Pierio, two Italian players the manager had good times with on the field.
Having said that,he has named some incredibly gifted players in his team,they are, Cafu, John Terry, Frank Lampard, Paolo Maldini, Andrea Pirlo, Kaka, Andriy Shevchenko, Thiago Silva and Zlatan Ibrahimovic, Zinedine Zidane and Buffon in his ideal 11.
But every single one of these player will come second to Ronaldo and Messi ,when the book of the greatest players ever is being written.