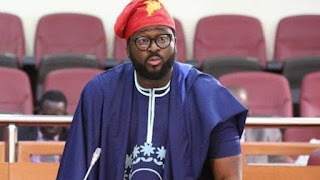 The Desmond Elliot speech at the Lagos state house of assembly,regarding Nigerian youths on social media,after the end sars protest and Lekki killingd, was a total let down and disappointment.

I liked Desmomd Elliot.I would have a lot more respect for him,if his anger and tears had been because Nigerian youths were killed at Lekki

and not because the staff of the Oba was stolen or the curses of the youth.Would happy people curse?I never heard Desmond express anger, outrage and tears becos unarmed protesters were shot at by the army.I think he was pushed forward to make that speech cos they felt he was closer to the youths.

The anger at which he was making the plight of the Oba and his stolen staff known was incredible.Equally so was that of the youth reigning curses.But he never showed such for the poor kids who were killed or shot at in Lekki by soldiers while they were unarmed and sitting on the floor.

He really should be ashamed of himself.

When Desmomd was running for office a lot of youths were excited and supported him.They thought the status quo was being broken amd this was a young man who was closer to them and can help fight for their rights and betterment.

But absolute power corrupts absolutely.Elliot has gotten a taste of it and forgotten his roots or where he was coming from.

CAN'T see how he will WIN the next election and rightly so.He should be held accountable for this and i hope he never smells power again.This will teach others to take their time and think before they open their mouths.