byNaija Blog Queen Olofofo -April 06, 2016
0
Paul Walker death.A judge has cleared Porsche of any responsibility for the car crash that killed actor Paul Walker and his friend Roger Rodas. Walker and his friend Roger Rodas died in 2013 when the Porsche Carrera GT they were both in, driven by Rodas crashed into a tree.
Rodas’ widow Kristine went on to sue Porsche alleging that the Carrera GT had various ‘defects’ which resulted in her husband losing control of the car. 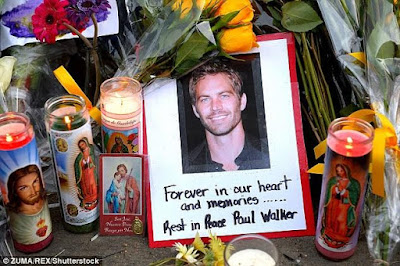 Porsche strongly denied all allegations and have now been cleared of any responsibility in the star actor and Roger Rodas' death.

According to TMZ, Kristine's argument that the car was ill equipped to handle side impact was moot, since the fatal force came from the front when it hit the lamppost - as her own expert confirmed.
US District Judge Philip S. Gutierrez also rejected the front impact argument because 'Rodas' fatal injuries occurred when he actually was hurled into Paul Walker.'

He also rejected the fuel cell argument, finding that it was not the cause of the fire, and held that Rodas' lawyers had not presented evidence demonstrating the crash was caused by a defective suspension.
Her attorney, Mark Geragos has confirmed that the ruling will be appealed.
Tags celebrity news
Previous Post Next Post