Femi Fani Kayode has been attacked in custody of EFCC.Reports says he was attacked yesterday, alongside other detainees by an EFCC operative, Suleiman Kabiru. A source confirmed that Kabiru has constantly harassed detainees who engage in saying prayers while being held at the commission’s
facility.

“Matters came to a head on Saturday when, without any provocation, Suleiman Kabiru, charged at FFK injuring him in the process,” the source said. The source said Kabiru was visibly angry and asked him (Fani-Kayode) why he would not obey his instructions. 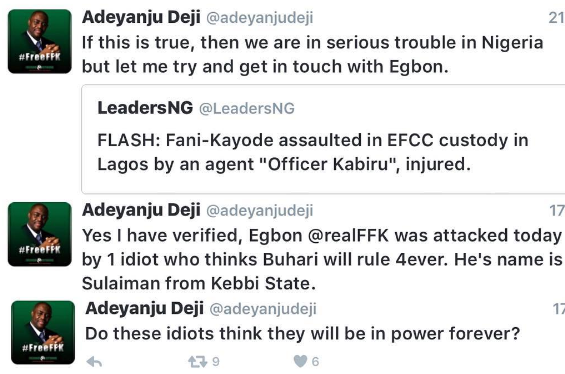 He however told NAIJ.com that Kabiru was stopped from inflicting more harm on Fani-Kayode, through intervention from other officials of the commission. PDP’s Director of New Media, Adeyanju Deji, later confirmed the news via his Twitter handle.
Tags femi fani kayode Politics
Previous Post Next Post