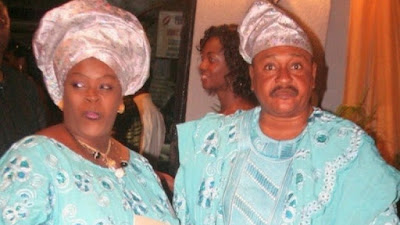 Actress Henrietta Kosoko burial took place on Friday 10th of June but her husband Jide Kosoko was conspicuously missing.
Her burial ceremony was suddenly moved to Abraka (Delta state) by her family on Friday,because she had not had a proper traditionally wedding where her husband met the family .
The burial earlier scheduled for Atan Cemetery, Yaba, after a planned service at Regina Mundi
Catholic Church, Mushin (both in Lagos), on Friday, was hurriedly rescheduled for Abraka, in spite of all the preparations on ground.

And Jide Kosoko, who tried to persuade her family to allow the Lagos arrangements to go on as as planned, missed the ceremony in her homestead. And sources close to the Kosokos have adduced three  reasons he missed the Abraka ceremony. 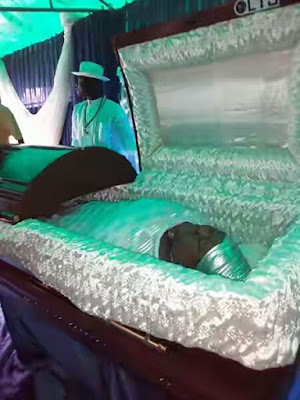 Here are the three reasons Jide Kosoko, father of two of Henrietta Kosoko's children (Muyiwa, 17, and Temilade, 16) didn’t attend the ceremony :
1. Jide Kosoko has never been to Henrietta’s Abraka homestead before – Throughout their almost 20 years as a couple, he has not once visited the home town of her partner, and he was unsure of the consequences of now attending the burial of his wife there.
2. He was apprehensive of the repercussions of not being properly married to her – Because he never really asked for the hand of their daughter in marriage, he was scared of the rites burying her in Abraka might throw up. He didn’t know whether he would have to first complete marriage rites, before the funeral would proceed. And getting married to a deceased wife is not only scary, but might involve certain uncomfortable rites.
3. The old don’t really participate in the burial rites of the young – In the Yoruba culture, older people are usually not permitted to attend the funeral of those younger. It is believed it is bad form and might bring ill-luck.
Meanwhile,the Nollywood Yoruba actress' younger brother Krisvosa shed more light into how,Henrietta died at the age of 53 last week Monday after a short battle with diabetes, her younger brother, Krisvosa, who was her manager  debunked media reports that she ‘slumped’ at home and was rushed to R-Jolad Hospital, Bariga, Lagos state.
Krisvosa said Henrietta fell seriously ill two weeks ago and was taken to the said hospital and had returned home before the sickness relapsed.
Speaking during his sister’s wake keep at their residence yesterday, Krisvosa said, “It all started two weeks ago. Apparently, she was diabetic and was managing the ailment.
“She fell seriously ill two weeks ago and we took her to the hospital and where she was admitted for few days. She came back home doing very fine.
“She showed great sign of recovery and everybody was happy that the storm was over.
“Few days after, the sickness relapsed and we took her back to the hospital. She was admitted for the second time and died two days after.
“She died around 9 am on Monday morning,” Krisvosa averred.
Tags Nigeria Entertainment News nollywood actress yoruba movies
Previous Post Next Post