What Andy Murray must to do become No 1 Tennis player in the world!

What Andy Murray must to do become No 1 Tennis player in the world! 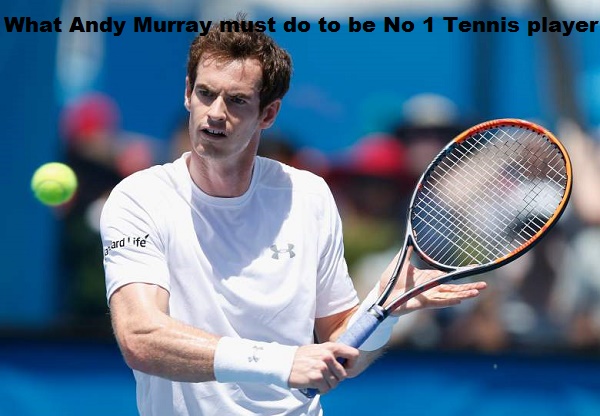 Will Andy Murray ever be the No 1 tennis player in the world?Well,if he want's to be,this is what he has to do to be the No 1 ranked tennis player in the world.
Listening to Andy speak,he has the confidence and feels he can get there and stay there,this is what he said when asked-
"I believe I can get there. I definitely believe I can get there," said Andy Murray of the prospect of becoming the world's leading male tennis player.
"These last few months have proved that to me.
"I may never get another chance to be number one, so I'll give it my best shot to do that
while I have the opportunity."

Murray is closing in on the current world number one Novak Djokovic on the Emirates ATP Race to London. He trails the Serb by 915 points.
His comments that he "can get there" came in the wake of beating Roberto Bautista Agut in straight sets to win the Shanghai Masters.
For that, the 29-year-old earned 1,000 ranking points. Djokovic lost to Bautista Agut in the semi-final.
Murray is in the form of his life. His win on Sunday was his 41st tournament victory, a tour-best 65th match victory of the season and his sixth trophy of the year, which ties a career best.
Spain's Bautista Agut, who was playing his first Masters final, said it was clear how much Murray wanted to secure the top spot.
"I think I can see it in his eyes," he said. "He's really focused on getting number one."

What's up next for Murray?

The Scot has three tournaments left to play this year - the Vienna Open (24-30 October), which he won in 2014, the Paris Masters (31 October-6 November) and his eighth season-ending ATP World Tour Finals in London (13-20 November), where the 200 points he won last year will drop off before the tournament begins.
Djokovic, a 12-time Grand Slam winner, is not scheduled to play until the event in Paris and will then compete in London.
A tournament win for Murray in Vienna would lift his points tally by 500 points, while Djokovic rests.
The Serb's 2,300 points from last year's Paris Masters and the ATP World Tour Finals drop off on 7 November.
Murray, who is defending 600 points from last season's efforts in Paris, will hope to have secured a fresh 1,000 points for winning in the preceding days in the city.
Some 1,500 points are up for grabs at London's O2 for an undefeated winner at the World Tour Finals.

What else has Murray been saying?

Murray told Sky Sports: "My goal wasn't to finish number one at the end of this year but in the early parts of next year there is an opportunity - 900 points doesn't seem like loads.
"But Novak will win matches. He is the best player in the world. I don't think he has lost an indoor game in a long time."
And he told the ATP website: "I still have to win three more tournaments. That's not an easy thing to do.
"I have never had success like I have had the last few months in my career, so to keep that going, I'm aware it's going to be a difficult thing to do.
"I need to keep myself motivated and be smart with my schedule and my time off, as well."

BBC Sport tennis correspondent Russell Fuller
"Andy Murray is showing the end-of-season form usually associated with Novak Djokovic.
"He has won 23 sets in a row since losing to Juan Martin del Potro in the Davis Cup semi-final, and heads to Vienna in a week's time with the chance to make further inroads into the Serb's rapidly evaporating lead at the top of the world rankings.
"Djokovic is not due to play until the Paris Masters, an event he has won three years in a row and four times in total.
"Murray has never won the Paris title, and fatigue may become an issue. But were he to win in both Vienna and Paris, then he would become world number one if Djokovic failed to reach the final in the French capital."
By BBC Sports
Tags Sports tennis
Previous Post Next Post