What did Drake say to Cudi to start Beef?Height and weight in big fight!

What did Drake say to Cudi to start Beef?Height and weight in big fight! 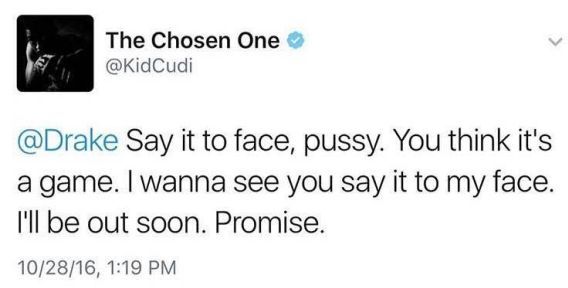 The Drake and Cudi beef is threatening to boil over.Now Cudi who is in rehab has sent a message to Drake promising to be out soon.So what did Drake say to Kudi?
The singer/rapper Kid Cudi reignited his beef with rapper Drake as he took to his Twitter handle to blast Drake, calling him a pus** and asking him to 'say it to my face'

It promises to be an interesting fight but Drake weight heright and weight at 183 cm or 6ft 1,152 pounds, Arms–14, Chest–41 seems to have the upper hand in physical statistics,thanks to his new regime of the gym.On the other hand Kid Cudi height at 1.74m and weighing 149 lbs (68 kg) seems to be on the lighter side.But hey,it's not always decided by physicality,lol.

So what is the genesis of their beef? In September, Cudi took to Twitter blast Kanye West and Drake, writing;
"Everyone thinks they're soooo great. Talkin top 5 and be having 30 people write songs for
them,"
"My tweets apply to who they apply. Ye, Drake whoever"
Now in Drake's birthday edition of OVO sound radio, Drake released four new songs and in one of them rapped a line that seemed to be a dig at Cudi, who early this month checked into rehab for depression and suicidal thoughts.
The rap line goes : 'You were the man on the moon, now you go through your phases.'
This evening, having heard of the rap line, Cudi took to Twitter and came directly for Drake, tweeting at him - "You think it's a game. I wanna see you say it to my face. I'll be out soon. Promise."

Some fans blasted Cudi, saying he needed to focus on his rehab while some came to his defence saying he was better than Drake. See interesting Twitter reactions below.... 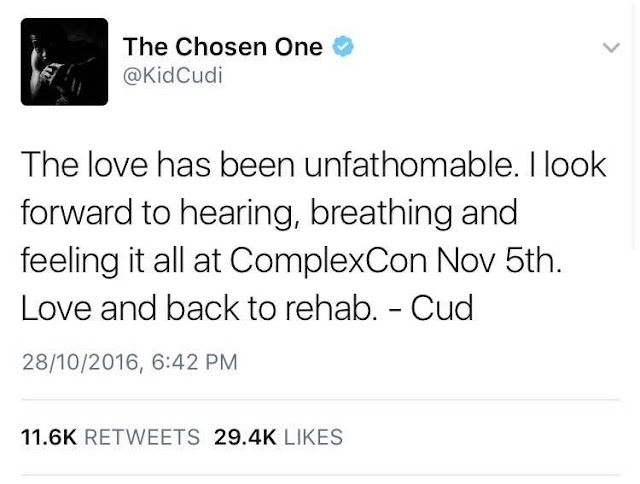 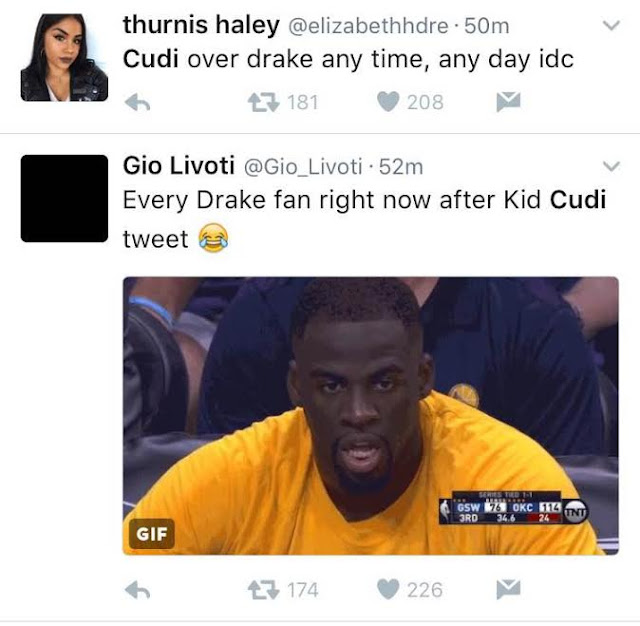 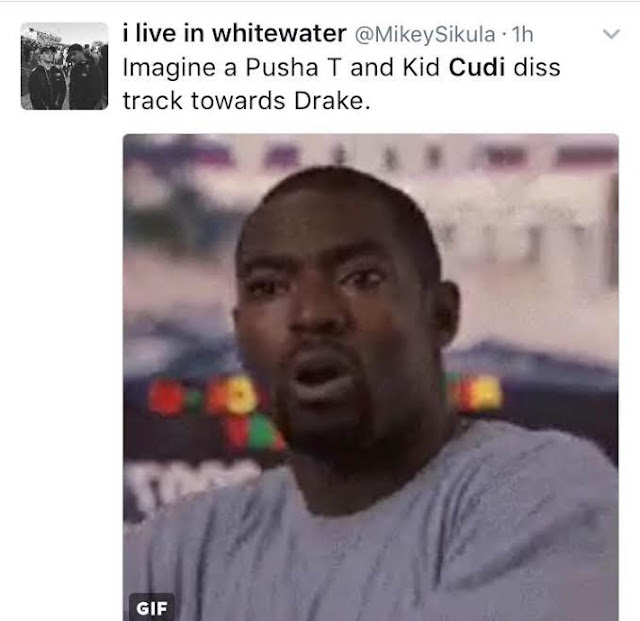 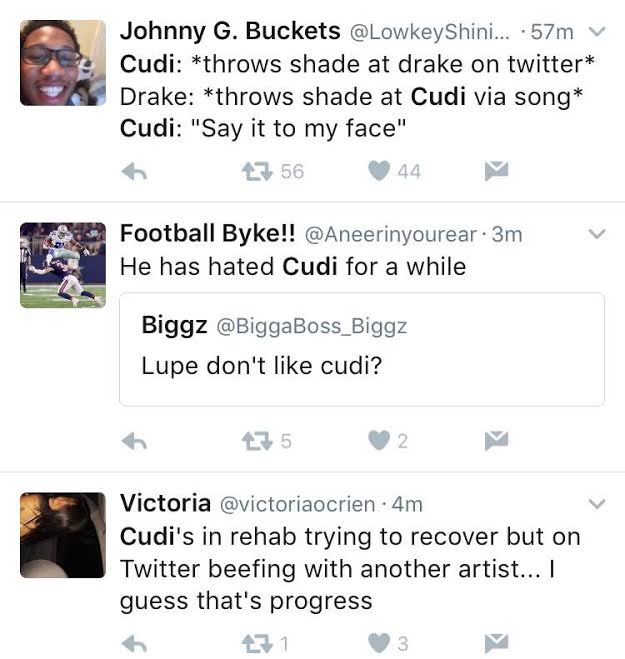 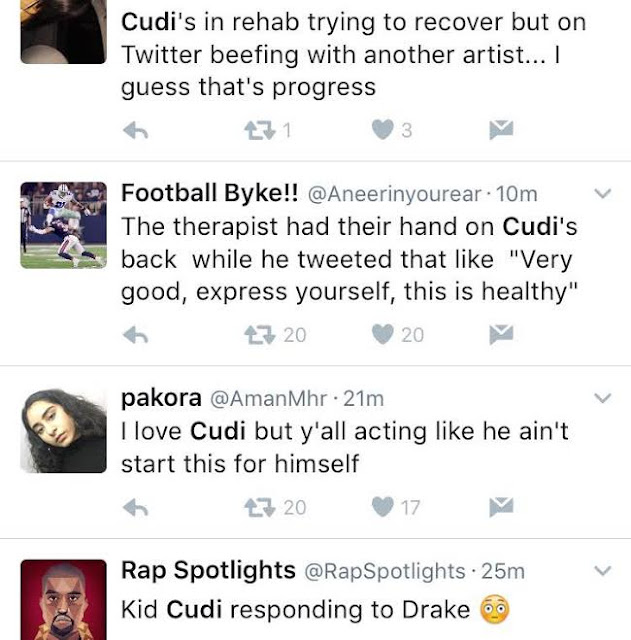 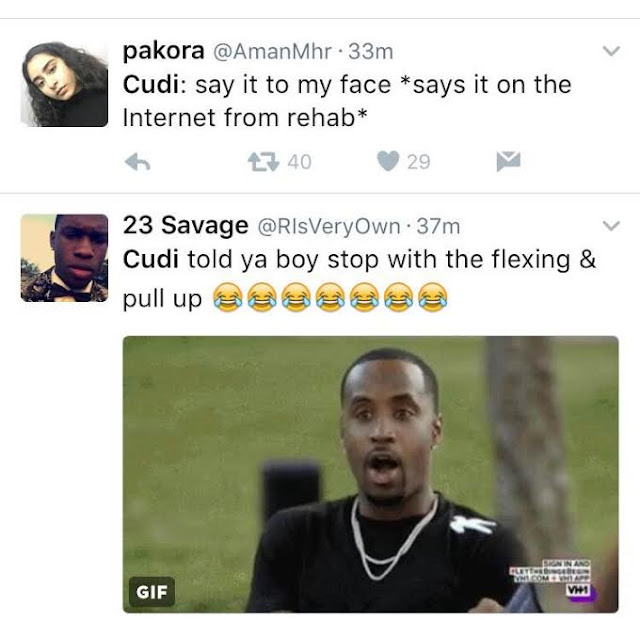 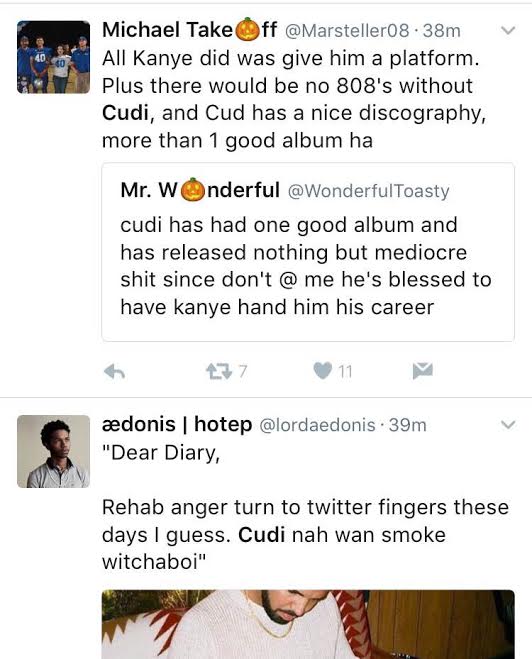 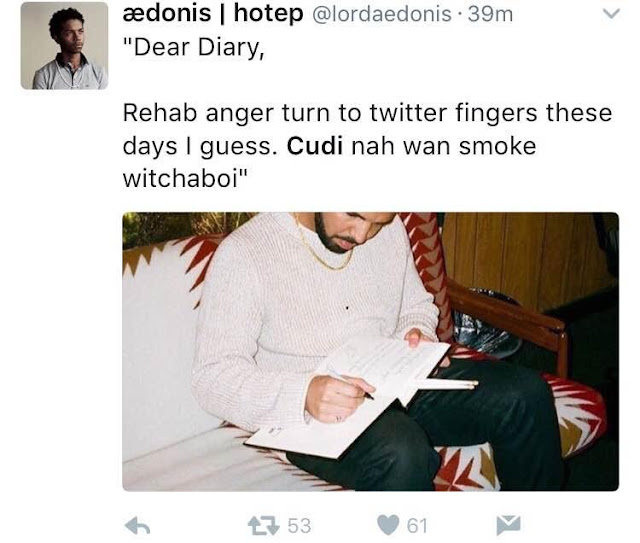 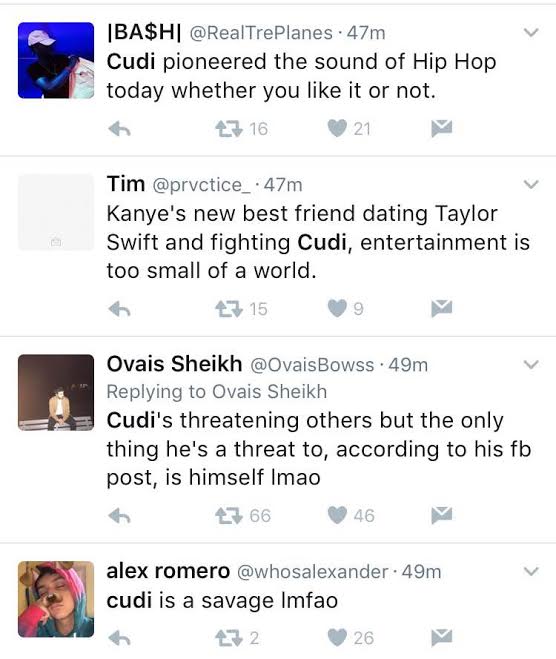 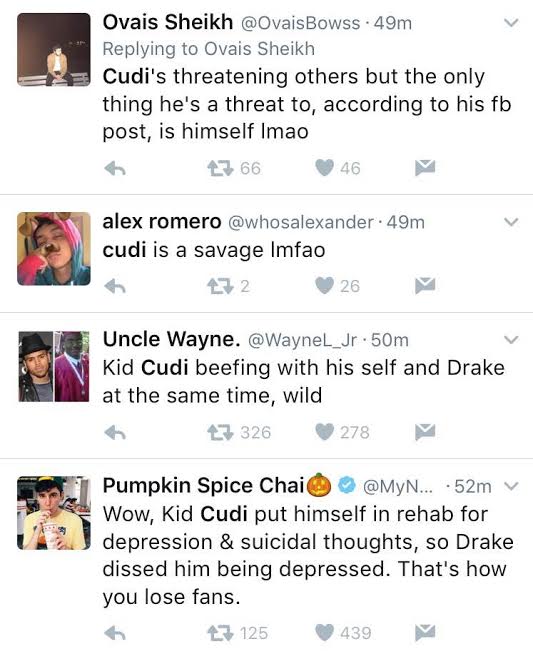 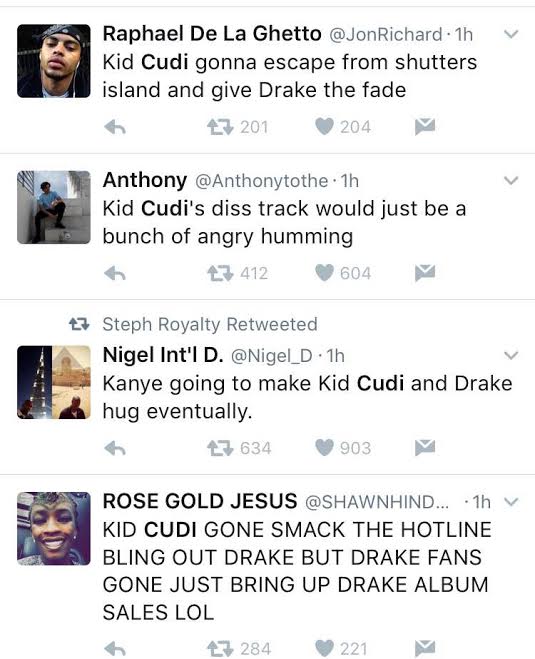 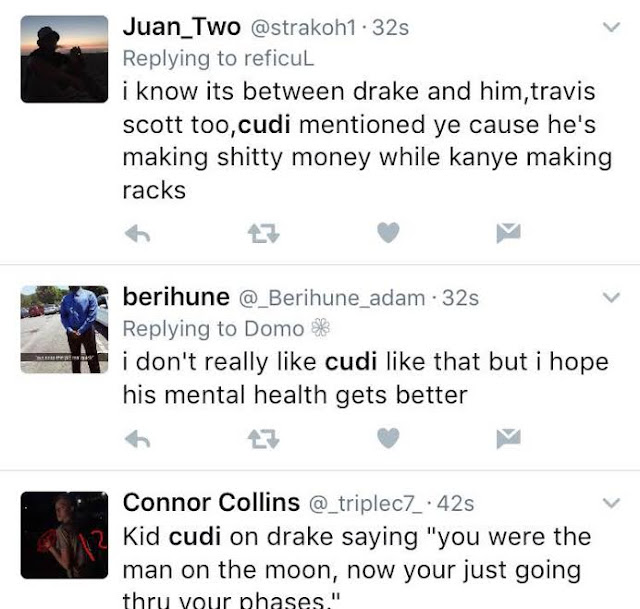 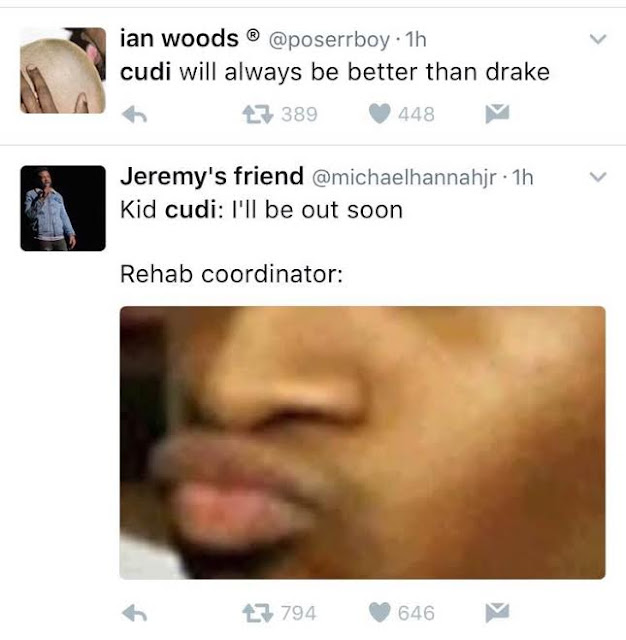 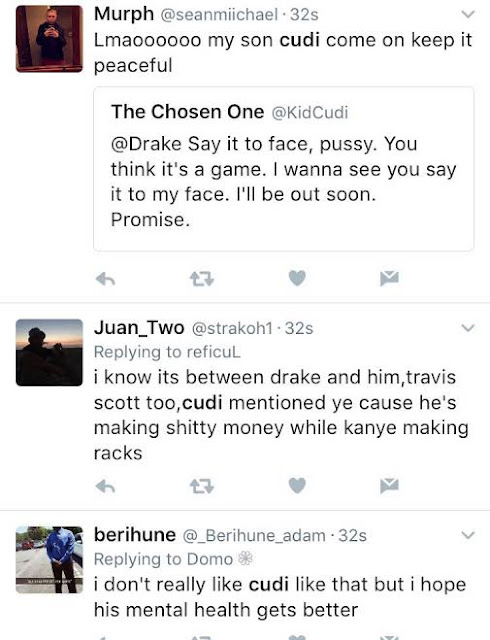 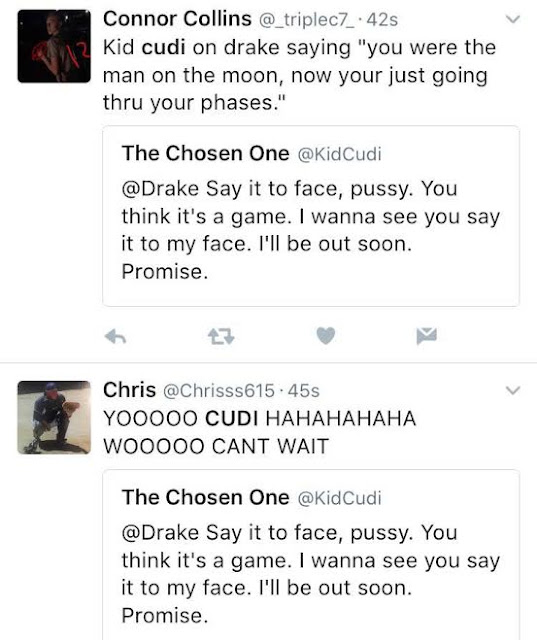 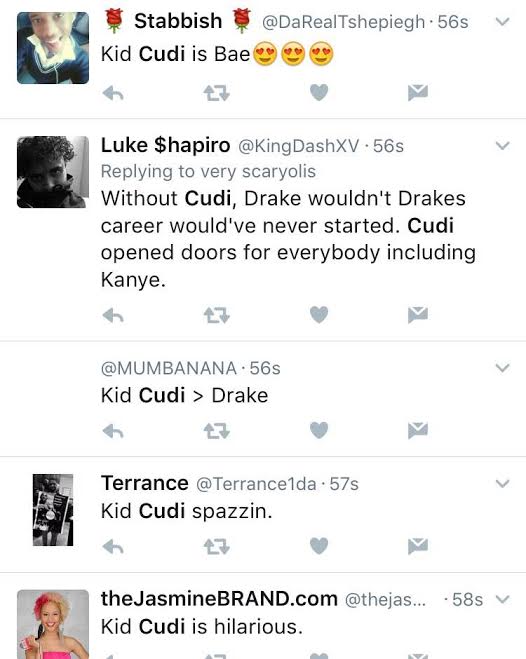