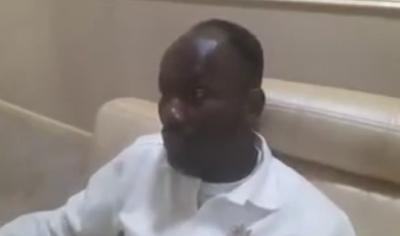 Apostle Johnson Suleman prophecies are a thing that usually causes controversial headlines,but this time around,the Senior Pastor of the Omega Fire Ministries,has threatened Nigerian government that if he is arrested or detained for just one day by security agents,the damage that will result in Nigeria will take a year to repair!
He was saved by Governor Ayo Fayose as he was about to be arrested in Ekiti state.
The self style man of God was almost arrested last night by DSS Operatives in Ekiti state.
According to reports,The Pastor who was in Ado Ekiti for a two-day crusade that was also attended by Fayose was trailed after paying a courtesy visit to the governor at the Government House to his hotel room by the operatives of the DSS in Adebayo area of the State capital who almost forced their way to his room but were resisted by security men of the hotel that insisted to
know their mission.
Naarrating his ordeal,the controversial clergy man said- “I came to Ado Ekiti for a crusade. But I had a premonition that I was being trailed after I preached that Christians should retaliate any attack or killings by the Fulani herdsmen. These Fulani headmen had turned many Christians to orphans and widowers but the time has come to protect ourselves. “I received several calls from hidden numbers trying to locate where I am and I had warned my security not to allow any Fulani man to come nearer me. So when the men of DSS came in the middle of the night I knew their mission and I had to call the Governor because if they arrest me, they will put this country in fire”.

He boasted of having churches in 42 countries and he has alerted them,saying:

"If I spend one day with security operatives, I have churches in 42 countries and I have alerted them. Every Nigerian embassy in those countries will be in trouble. If I spend one day with the security operatives, the damage that will happen in Nigeria will take one year to repair. In this country alone, I have over half a million and there are reactions already" he said.

Part of the reason why he has in the past had a stand off with the country's authorities is the Fulani herdsmen who have been involved in killings all over the country.He strongly feels they have been left unchecked while others who so much as cough in the country for any offence are arrested.

Just this past weekend,videos of him online trended when he urged his church members to kill any Fulani men they find in their church premises.After that statement,it was only a matter of time before the authorities came looking for him.
It would be interesting to see how this pans out.While on one hand,the Fulani herdsmen have truly been an unchecked menace,you can't also go around telling people to kill and cut off the head of others.That leads to anarchy.
Governor Fayose also gave his version of the incident saying he expected the man of God to have been invited through the proper channels if they wanted to speak to him: “ if they have any issue with him instead of arresting him in the dead of the night after a powerful and spirit-filled crusade in my State. The Governor said, “I personally attended his crusade and I think it is wrong for a man of God who is armless that could be invited if they have any issue against him. Are Christians and Moslems under different dispensation of the rule of law? . That’s why I went there to rescue him. Let them kill two of us together. But when they saw my vehicles and the crowd, they fled.

Below is the Apostle Suleman Johns video ..