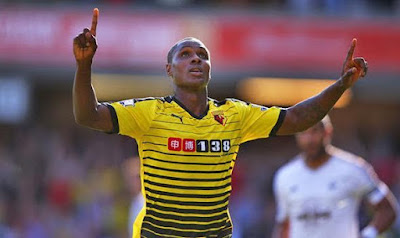 Funnily,he could have earned much more laqst year as he was offered £300,000 a week by another Chinese club.At that time he decided to stay with Watford and in the premier league.
I think how he quickly went from a regular to being on the bench convinced him that football
is an unpredictable game,making him earn as much as he can cos nobody knows what might happen tomorrow.
He struggled to make an impact netting only one goal this season after scoring 15 Premier League goals last season.

According to a Daily Mail report, Changchun Yatai bought the striker for £22million from Watford in England.

However, earlier in January we also reported that Super Eagles of Nigeria captain, Mikel Obi signed for Tianjin TEDA in China, where he is also the captain too
Tags football Sports
Previous Post Next Post