The Remy Ma Nicki Minaj beef has got hip hop fans licking their lips in anticipation of some good diss songs.The history of hip hop is littered with great battles between rappers and The Remy Ma shelter lyrics is going on that path. 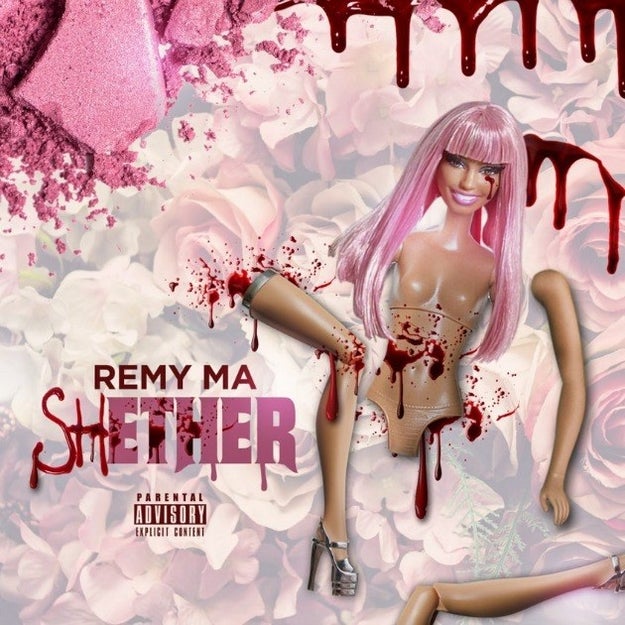 Some background info on those of you who don't quite know who she is.

She is a Grammy-nominated rapper from the Bronx, NY who released her first solo album There’s Something About Remy: Based on a True Story in 2006. Though you may know her for the hit song “Lean Back” with the group she’s a part of, Terror Squad. 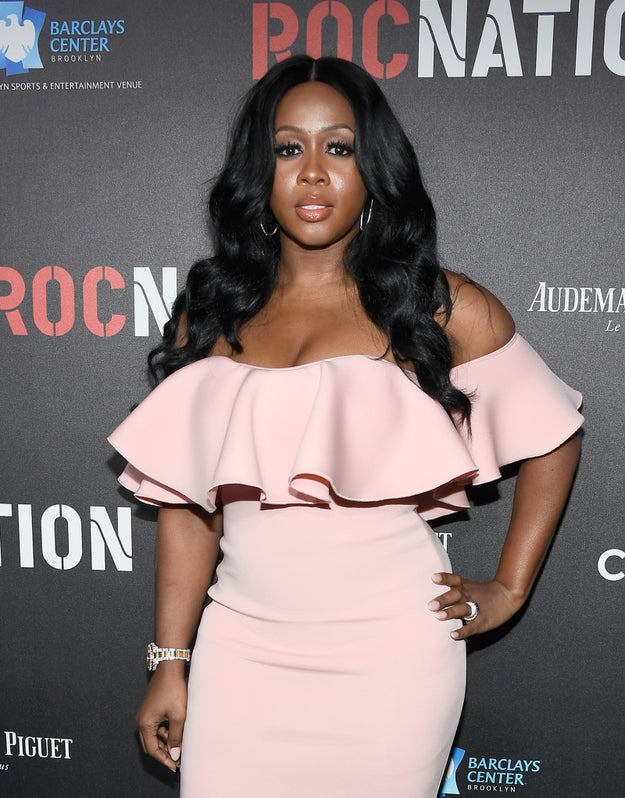 Frazer Harrison / Getty Images
She’s also married to the rapper Papoose. And on August 1st, 2014 she was released from jail after serving six years for assaulting a friend, and has been making music with Terror Squad since, including the Grammy nominated, platinum single “All The Way Up.”
ID: 10597187

But the two female rappers were not always enemies,she can be seen below congratulating the anaconda rapper....

But later in the year, Remy released “Wait a Minute (Remix)” — and many people thought some of the lyrics were meant to knock Nicki, though she was never called out by name. Those lyrics in question include: “Will I smoke this bitch? / Yes” and “That ghostwriter ’bout to call her / That lifeline getting shorter / R.I.P. Biggie Smalls, why the f*ck they ain’t want her”
ID: 10597194

4. BUT THEN. On Friday, Gucci Mane released “Make Love” featuring Nicki, and it’s pretty evident she’s talking about Remy. Its goes: “Oooohhh, oh you the qu-e-e-the queen of this here? One platinum plaque, album flopped, bitch, where? (bitch, where?)”

5. And seemingly in response, on Saturday, Remy Ma posted this photo to Instagram:

6. Then about an hour later, she released the 6 minute plus diss track of vicious-ness called “shETHER.”

The entire song is directed at Nicki, but some lyrics to note: “You was screaming ‘Free Remy’ when I was upstate doomed /But now that they freed Remy, you don’t sing the same tune,” and, “How are you on the VMAs acting like you hood? / Way across the stage, talking ‘bout ‘Miley, what’s good?’ / That’s Hannah Montana, she was always happy / You only fronted on Mariah ‘cause Mariah don’t carry / Tried to disrespect Taylor ‘cause Taylor wasn’t Swift enough,” among many, many others.
ID: 10597060

7. And if you pay attention closely, you’ll notice that Remy Ma and Nicki Minaj are modeling their diss off one of rap’s most infamous beef’s: Nas and JAY Z. 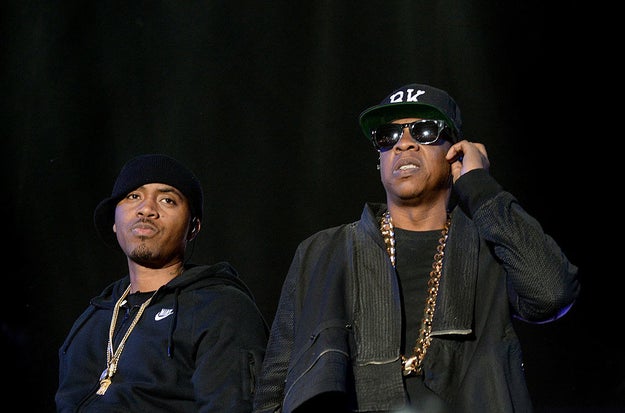 Frazer Harrison / Getty Images
Pinkprint, Nicki Minaj’s third studio album, is a nod to JAY Z’s Blueprint. Remy’s diss track is called “sheTHER,” a play on the word “Ether” that is consequentially the title of the diss track in which Nas targets JAY Z.
ID: 10597196

8. An hour after the song dropped, Nicki “responded” with this Instagram:

9. Along with this one, where you can hear Beyonce calling Nicki “the rap queen”:

10. Needless to say, everyone on Twitter is freaking the fuck out: 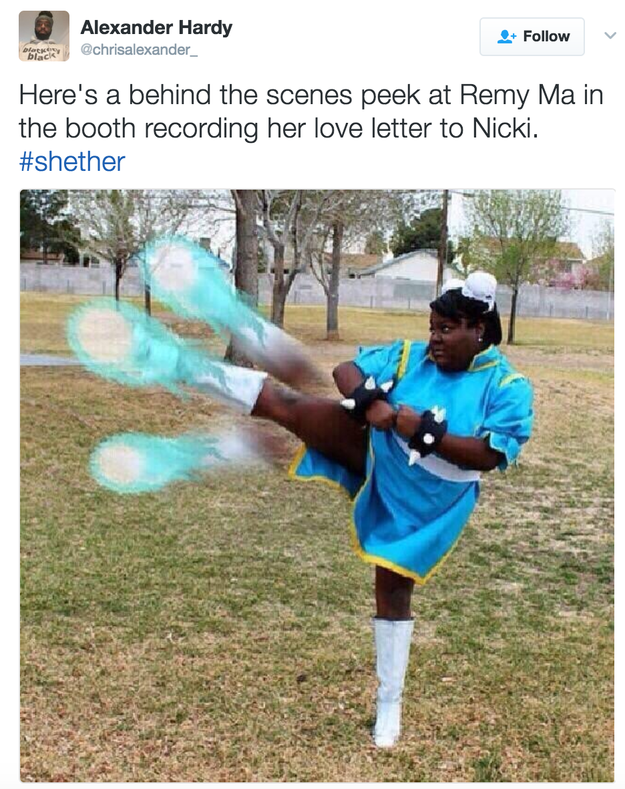 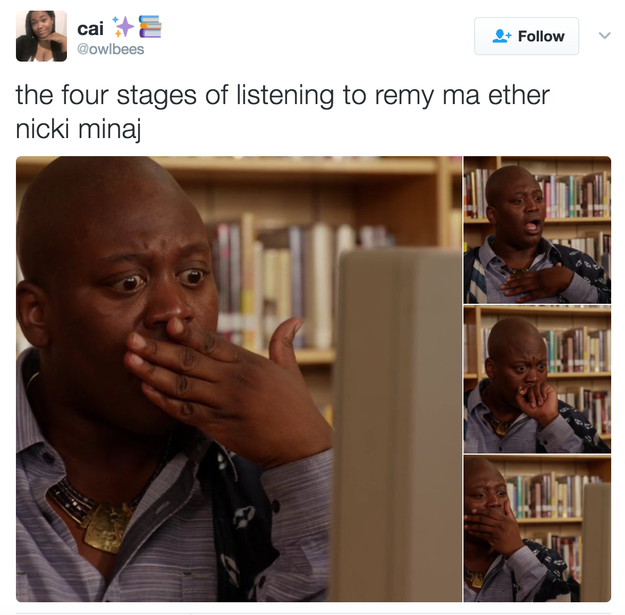 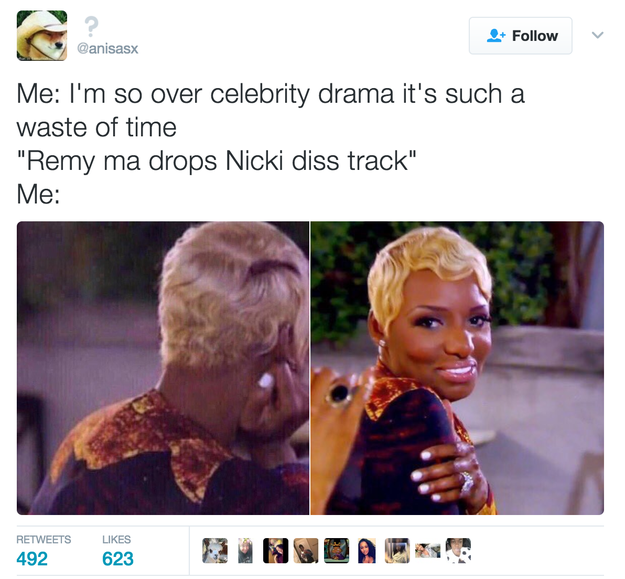 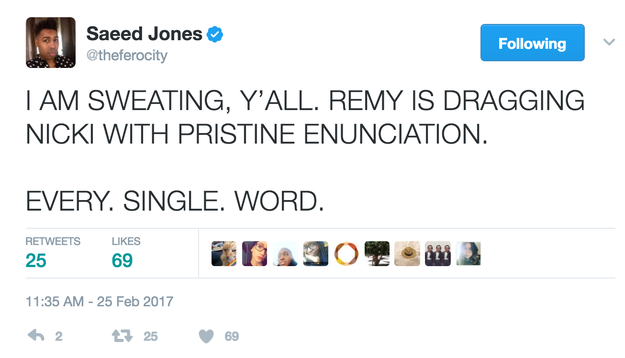