The saga of Apostle SULEIMAN JOHNSON and STEPHANIE OTOBO some chick who accused him of an affair is absolutely ridiculous.affair has it all,video chat sex shots,pregnancy,denial,betrayal and blackmail.
Nigeria really does make me sad.I look back at my youth and now realise we had it so good,even though we were complaining at that time.

She claimed she was sleeping with him,she has released snap shots of their chats and she was naked in those shots..Anyone who sees the demeanor of that so called pastor will know he was chatting to a girl.(not that i do those things myself,lol)

According to her,he had promised to marry her and then changed his tune when she got pregnant.Na today?Men have been defrauding girls since 1884!And it doesn't matter if they are so called men of God or not.A man is a man is a man and always a man!!
He won't be the first man of God that women will bring down and he won't be the last to fall for the temptation of a woman.
Now ,they have charged this girl for all sorts of crimes and taken her to court sharp sharp...Below is the charges and it is the most ridiculous thing i have ever read! Who put that sh#t together?
They even called Suleiman the man of God in the charges..Should that be in a court document?How more bias do you need?
Just read the charges below and..i can't even say anymore,i am really speechless.
Now funnily,this same pastor clearly incited Nigerians telling them to kill anyone they perceive as a Fulani herdsmen. 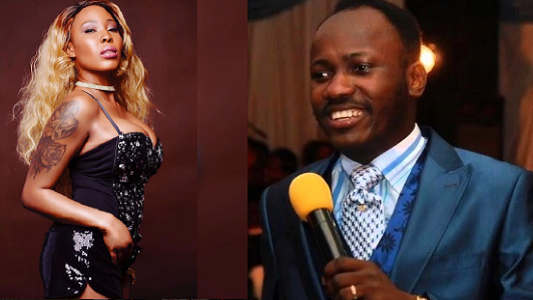 He was invited for an interview.Was not charged.Has not been charged till today.And a girl who says she slept with him has been charged a day after she makes this public????? Nigeria menh,i tire!

Why is it so hard for some people to see that 99.8 of these so called pastors or men of God are fake?It's all about the money for them.That's all they are interested in.That's the bottom line for them and i do believe this girl 100%!

Now Stephanie Otobo's father has come up with some cock and bull story about how his daughter is lying and Suleman did not sleep with her.BS! HOW MUCH HAVE YOU BEEN PAID DADDY?
Most people in Nigeria will gladly sell their kids down the river because some foolish pastor tells them the child is possessed or evil.
How many times have we seen this happening?Kids being beaten to death,tortured,abandoned,cos a church told their parents they are witches or wizards?
Although in this case,there is more to it.Her dad and mother had separated for 30 years.So he doesn't really know the daughter anyway.
According to Stephanie,there had been a mix up with some facts.Her representative wrongly said they had gone to meet her father. She said her earlier statement through her lawyer, Festus Keyamo, that Mr. Suleman took drinks to her family to conduct a formal introduction was inaccurate. Asked to give the details of the said introduction, saying it happened at the pastor’s office in the church’s premises at Auchi, Edo state. “Not at our house; he invited me and my mother to Auchi, because he does all night every last Friday of the month at Auchi. We went there, me my mother, my siblings. After the service, nobody sees him, but we went there to see him and he gave us N50, 000. So that made me think everything was real.

The lady who apparently is based in Canada or is a Canada returnee is pregnant.We don't know if she aborted the baby.If she hasn't,it's very simple,let's wait till she has the child and a DNA test will clarify if the Apostle is the father or not.
Although that is a long time away,a lot of money will probably exchange hands before then.
We know how these things work.