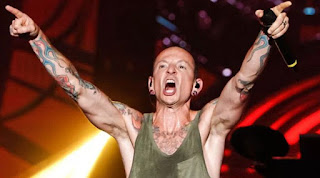 The untimely death of chester Bennington,Linkin Park lead singer has re-enforced the notion that something really has to be done fast about depression.Chester took his own life in his home by hanging after struggling against the condition for some time.One of his best friends in music Chris Cornel,who also took his own life fighting the same condition.
Now the spooky thing is the Linking Park singer committed suicide on his friends birthday.
It really baffles me how low a man who has millions in the bank not to talk of millions who adore him ,plus a beautiful wife and 5 children,can decide to end it all like that.
I guess we will never know,it is just one of those things that those who have been in the same
situation can explain.
Personally,i have been through moments as well when you think is it really worth hanging around?But i don't dwell in that place too long before i snap out of it.
I guess the heavy use of drugs by the singer did not help either.He confessed to have used everything from acid,to meth cocaine trying to find himself.
It's really sad,such a young life,and what do you tell those kids?Could he have been stronger and hung around for them?
Who knows?

But Chester Bennington cause of death will be something that will for ever haunt his children,wife ,family and friends.They will all think at one point maybe they could have helped,maybe they should have sensed something,maybe he was talking to them and they did not hear it.
I hope they don't torture themselves too long.There was nothing they could have done about it....
RIP.
Tags celebrity health matters People
Previous Post Next Post