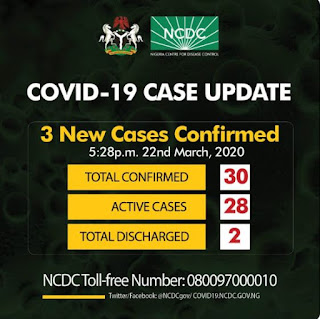 The NCDC have announced Nigeria’s cases of coronavirus has risen to 30.Many actually believe the number is more since these
numbers are only of those cases that were tested.What about the many who have it and don't know?

The Nigerian center for disease control,further said on Sunday the 22nd of March afternoon,“Three new cases of #COVID19 have been confirmed in Lagos, Nigeria,”
“2 cases are returning travellers and 1 is a contact of a confirmed case.” 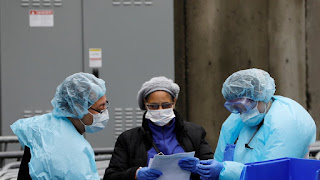 In the news update,it revealed there are 30 confirmed cases of #COVID19 in Nigeria.Of the 30,two have been discharged with no deaths, NCDC said.
So far, 22 of the 30 cases were confirmed in Lagos State. Four cases were confirmed in Abuja, one case in Ekiti, two in Ogun State and one in Oyo State.
It isn't all bad news though as two of the cases have been declared negative and discharged in Lagos State after treatment at government facility in Yaba, Lagos.
Already,the government have made many awareness steps,with the president,Muhammad Buhari adderssing the nation of steps being taken and also emploring Niherians to stay safe and take safety measures.