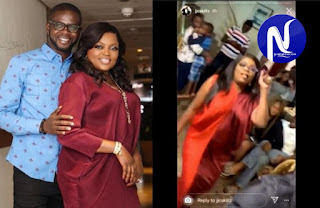 How Funke Akindele's birthday house party for her husband ended up with her being arrested by the police! 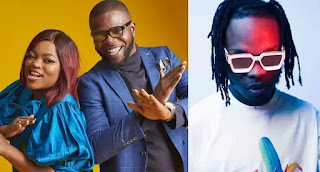 The actress and her Husband “JJC Skills” threw a party in their apartment yesterday in celebration of JJC’s birthday despite the ban on gatherings by the Lagos State government. The party had in attendance a number of stars namely Naira Marley, Zinolensky, and Eniola Badmus who recently returned from the UK. In attendance also was popular business tycoon, politician and owner of Amen Estate, Babatunde Olalere Gbadamosi who has also tweeted that his presence there was just a courtesy visit to The Bello’s
In a live video feed via Instagram, the house was filled with a large number of people making merry, singing and dancing to songs by Naira Marley.

In the video, JJC hit his chest as he declared “Marlians la wa – we are marlians”. His wife was also seen dancing minutes into the live feed.


The video was deleted after it surfaced on twitter. Nigerians however always have receipts. Several tweets and comments have surfaced condemning the house party, as well as Funke and her husband. Funke who happens to be a brand ambassador for Dettol and has also ran an ad for NCDC, has been “dragged” all day for not practicing what she preaches. In the ads, she advised Nigerians to comply with the social distancing rule and practice proper hygiene.
Prior to her arrest, Funke Akindele posted a video on twitter apologizing and explaining why she had a large gathering. “We’re shooting the sequel for Omo ghetto. Some of them have been here months, weeks and days before the lockdown.” She explained in the video.

JJC however, showed little or no remorse for his actions as he posted a video also saying “It’s your data, you can talk as much as you want”.  JJC Skillz, Naira Marley and others that attended the party have been asked to turn themselves in or risk being declared wanted.
This incident is coming in days after the Sydney Talker incidence. Funke Akindele and everyone in the video might be “scapegoats” for Lagosians who feel like flouting the rules. LASG had amade it known before the full lockdown began that offenders risk a month in jail or a fine of 100,000 naira. Dettol and NCDC have also pulled down the ad Funke ran from their official pages as well.
Tags Nigeria Entertainment News
Previous Post Next Post