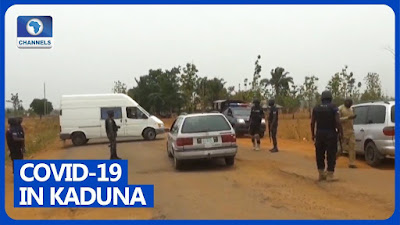 Kaduna coronavirus report:An army general is said to have been arrested in Kaduna state for flouting the lockdown order issued by the state government over the Coronavirus pandemic. The state's commissioner of justice, Aisha Dikko made the announcement on Monday May 18.

I personally take this report with a pinch of salt.Reason why?Ok,they named the Islamic cleric,why couldn't they name the general?If he was not too big for the law to be
arrested,why couldn't he be named?I really don't believe the story.

I can't imagine an army general being arrested in Nigeria for something like this,i just can't see it,and the fact that they have named one and chosen not to name the other,further confirms my scepticism.
Going on with the story,the Kaduna state commissioner for justice, said the army officer who was in full uniform and driving in from Abuja with three other passengers who had no face masks, was tried and convicted for not complying with the stay at home order and wearing face masks.

“The general identified himself and said he was coming from Abuja and on a official duty.
“However, the court tried and convicted the other three passengers, for not complying with the stay at home order and wearing face masks.”

It was further gathered that Yusuf Rigachukun, an Islamic cleric and his son were also arrested for flouting the state COVID-19 lockdown order. The Islamic cleric who was arrested at Kaduna State University (KASU) junction without face mask, reportedly gave an excuse of leaving his house because he was invited by the Kaduna State Media Corporation (KSMC) for a radio programme.

“Rigachukun and his son were however both charged for not wearing facemasks and were fined N5000 each.
"In addition, the court asked the cleric to perform community service, by informing the public on how to stop the spread of COVID-19.”

Dikko who warned residents against violating the COVID-19 lockdown order, further revealed that 75 culprits have been convicted out of the 105 people who violated the ban on inter-state travel.
Tags corona virus news Nigerian news
Previous Post Next Post