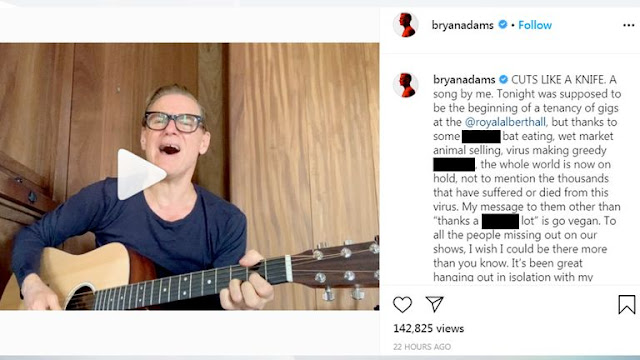 Bryan Adams Chinese post:Singer apologizes after he blamed  “bat eating, wet market animal selling, virus making greedy b*stards” in China as the source of Coronavirus pandemic.
I personally don't think the Canadian rocker meant any harm,most of us has said what he voiced out openly if we are honest enough.

It all started on Monday May 10,when Bryan shared a post on social media that read:

CUTS LIKE A KNIFE. A song by me. Tonight was supposed to be the beginning of a tenancy
of gigs at the @royalalberthall, but thanks to some f**king bat eating, wet market animal selling, virus making greedy b*stards, the whole world is now on hold, not to mention the thousands that have suffered or died from this virus. My message to them other than “thanks a f**king lot” is go vegan.

To all the people missing out on our shows, I wish I could be there more than you know. It’s been great hanging out in isolation with my children and family, but I miss my other family, my band, my crew and my fans. Take care of yourselves and hope we can get the show on the road again soon. I’ll be performing a snippet from each album we were supposed to perform for the next few days.

However after being slammed by many who interpreted his comment as anti-Asian or anti-Chinese, Bryan Adams has now apologized to everyone who took offence over his post. He claimed his intention was to promote veganism.

INTO THE FIRE. Title track from the same album. Apologies to any and all that took offence to my posting yesterday. No excuse, I just wanted to have a rant about the horrible animal cruelty in these wet-markets being the possible source of the virus, and promote veganism. I have love for all people and my thoughts are with everyone dealing with this pandemic around the world. Here’s the appropriately titled song that would have been performed tonight at the @royalalberthall . 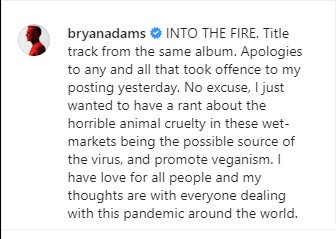 Wet markets are a common sight across Asia. They sell live fish, chickens and wildlife, as well as fresh fruit and vegetables, dry goods and household products. Many researchers believe that the virus originated from a wet market in Wuhan, China, although a theory that the virus emerged from a lab in Wuhan has gained ground in recent weeks.

The World Health Organisation on Friday May 8, said one such market in the central Chinese city of Wuhan played a role in the outbreak either as the source or possibly as an "amplifying setting", while stressing more research on the link was necessary.
Tags corona virus Entertainment music news People
Previous Post Next Post