Dead person wakes up at funeral caught on tape

Dead person wakes up at funeral caught on tape 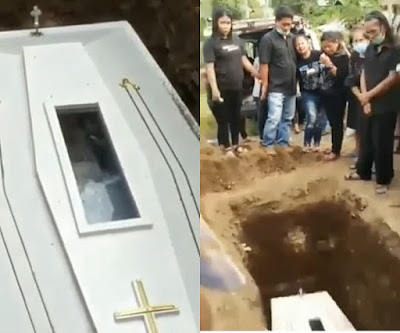 What is the longest someone has been dead and brought back to life?I ask this after the "dead person wakes up at funeral caught on tape" news.

Is this even possible?Is it real?Now a days,i take most things with a pinch of salt,because the extent people go to to trend on social media or the news is scary!

In this video below, a corpse appears to wave to mourners from inside a coffin. The strange incident, which was filmed by one of the mourners occurred as the deceased was being buried during a Christian service in the city of Manado in North Sulawesi, Indonesia, on May 5.
While the priest was conducting the service of the final rites,with family gathered round, a
hand and fingers could be seen moving under the glass panel in the casket.
Now for the eerie part,in the viral video,just as the the priest is heard saying: 'God has said in the book of John. I am the resurrection and the life. Whoever believes in me he will live even though he is dead.'The dead moved.


Watch the video and see what happens and then tell us your verdict.


Buried alive? Viral video shows haunting moment corpse appears to wave to mourners through coffin's glass panel This happened during a Christian service in the city of Manado in North Sulawesi, Indonesia, on May 5.
A post shared by Lindaikejiblog (@lindaikejiblogofficial) on May 13, 2020 at 10:38am PDT