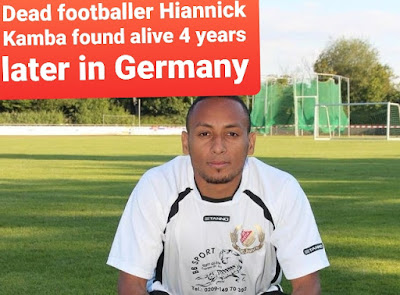 Hiannick Kamba death:A Congolese footballer who played for Schalke Fc in Germany thought to be dead has been found alive and well in Gelsenkirchen more than four years later.


Kamba had once been a team mate of word renowned goalkeeper,Manuel Neuer.He was last see four years ago, he was playing for German eighth-tier side VfB Huls.
But in a twist out of a movie script,the ex footballer Kamba now 33, has been found alive
in Gelsenkirchen, where he has been working back in his old job as a chemical technician for an energy company.

It gets better,his wife has now been arrested and facing prosecution for claiming a six figure life insurance policy after submitting documents that proved the player was dead! Wow! Rather conveniently enough,the husband claims not to know anything about this.But where were you when it was all over the press you were dead and people were sending in their RIP tributes?And then stupidly enough,he returns to a job he once had?
This is unreal.“[Kamba] stated that his companions had left him during the night while on a trip to the interior of the Congo in January 2016 and they took his papers, money and telephone.”
Kamba applied to return to Germany two years ago and will now be called as a witness.
Th prosecutors are alleging the papers were forged,well,surprise surprise.