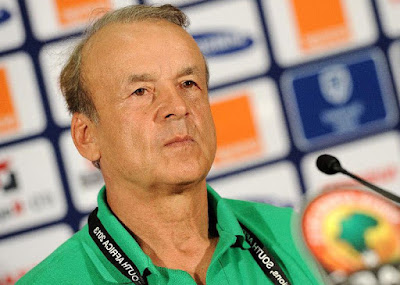 Super Eagles of Nigeria coach:The Nigeria Football Federation has finally confirmed the extention of the contract of Gernot Rohr as the coach of Super Eagles,for the next two and a half years.

The deal was announced by the NFF president, Amaju Pinnick on Wednesday via Twitter that both parties have finalised contractual negotiations resulting in the German tactician
remaining with the Super Eagles.

There has been a long draining saga on the appointment of the next coach,with rumours even arising that English coach Harry Redknapp,was being considered.I for one am happy the Redknapp deal did not materialise.He was far too old at 77 years.
Speaking further on the confirmation of the deal,Pinnick wrote-

I'm happy to announce that the Nigeria Football Federation and Coach Gernot Rohr have concluded all contractual discussions and he will stay on as Coach of the Super Eagles. We have always had confidence in his abilities and we are confident that the national team can only go higher from here.

We can now focus on qualifying for the World Cup and winning the Nations Cup. In truth, these are sacrosanct and Coach Rohr is aware of these conditions. Like the Honourable Minister of Youth and Sports Development has rightly noted; we are uncompromising in these goals.

The board of the Federation & I are totally in agreement with the minister on the goals for the team and it is unwavering. In the same vein, I would like to thank our sponsors, especially AITEO group.

AITEO's support for our football is unquantifiable, even in these difficult times and I cannot stress enough, how much of a rock they have been. Thank you, AITEO.

With the distraction of the contract talks out of the way now, we can now face our football on the pitch, totally. Again, I never lost confidence in Gernot Rohr's ability to take our football forward and I'm convinced our football will only get better from here on. 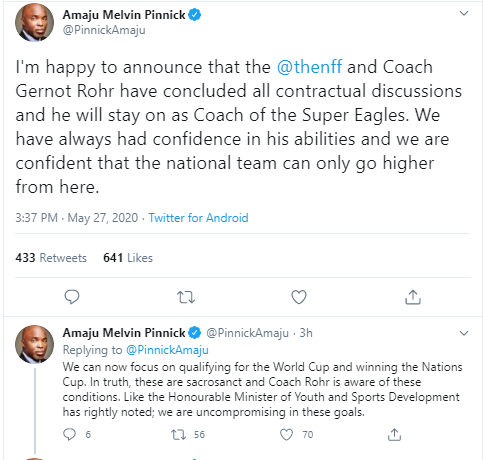 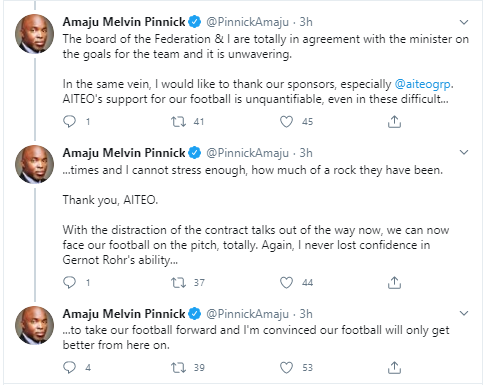 This comes days after the German tactician confirmed that he had been offered a new contract to remain the head coach of the Super Eagles for the next two years and a half.