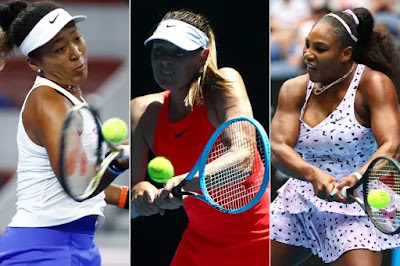 She also broke Maria Sharapova's previous record for a female athlete which was set in
2015 when she grossed $29.7 million.

Forbes magazine stated Osaka,who is a two-time Grand Slam champion, made £30.7m in prize money and endorsements over the past 12 months, setting a new record.The figure was £1.15m more than the amount earned by 38-year-old Williams.

Serena Williams,who has won a grand slam 23 times, has been the highest-paid female athlete for the last four years -- earning between $18 million to $29 million.

Japanese Osaka, also ranked at No. 29 in the Forbes top-100 highest-paid athletes in 2020, ahead of Serena Williams who sits 33rd. It’s the first time since 2016 that two female athletes have been ranked in Forbes’ top-100 best-paid athletes list.

If you recall,Osaka became known worldwide after beating Williams in the controversial 2018 US Open final.
Sharapova has a net worth of $195m,while Serena's networth is $200m.
Tags Entertainment Sports tennis
Previous Post Next Post