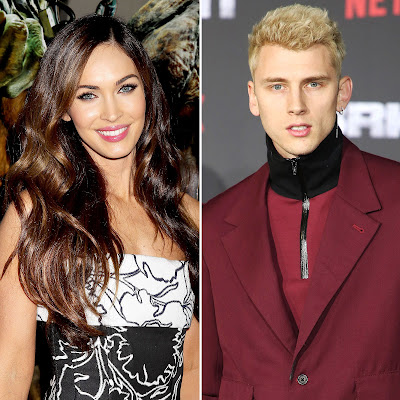 American actress,Megan Fox and Machine Gun Kelly are heavily being rumoured to be dating.The confirmation of Fox's split from her husband,46 year old actor Brian Austin Green after 10 years of marriage and 3 children hasn't helped the speculation.

Her husband was actually cool about the whole thing after he explained what led to the split.He explained that at a time while she was away filming,he had this dream that when she got back,things were not the same.That she was distant and off.Spookily,when she got back,this was exactly what
happened.She then asked for space.
I really must ask this Brian guy for the next lottery numbers with this gift of his.But seriously,he then said he was not angry about the whole thing,cos she didn't ask to feel that way,it was a feeling she had that she could't help.

Who is this guy?How can one man be so nice?Anyway,on rumours that Fox and Kelly were dating,he said  actor and musician Colson Baker (Machine Gun Kelly's real name) seems like a “nice, genuine guy,” adding that “[Fox and Baker] are just friends at this point.”
I give up on this guy,no guy is this nice and understanding.Maybe his coolness has to do with the fact that Brian Austin Green net worth is $15m!
I think i will be pretty chilled out too if i was that loaded.Till the divorce comes and takes half of it!

Kelly and Fox were spotted in LA on a date last week,hence all these rumours.What do girls see in this guy anyway?I guess with a name like Machine Gun,your curiosity will be piqued right?
Some of the the girls he has dated in the past include,Amber Rose,Noah Cyrus,Chantel Jeffries,Halsey,Emma Cannon,Sommer Ray,just to name a few.Damn! This guy is a machine for real.
Tags celebrity Entertainment hollywood
Previous Post Next Post