Facts about Nicholas Winton who saved 669 children from holocaust

Facts about Nicholas Winton who saved 669 children from holocaust 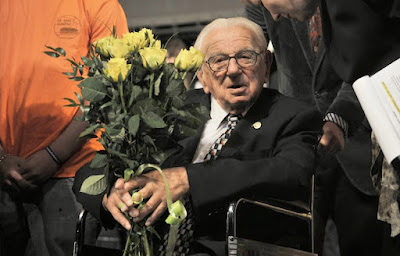 Who is Nicholas Winton:Sir Nicholas Winton is a remarkable man.This amazing Brit was a humanitarian who saved many Jewish children from the Holocaust.He had carefully devised a plan
Just before World War II started, he devised a plan to rescue 669 Jewish children from Czechoslovakia.
Where was he born?Winton was born in London, in 1909. He was the son of Jewish German parents, and the family changed their name from Wertheim to fit in.
He was working as a stockbroker in London when his friend rang him from Czechoslovakia asking for his help.
When he returned to England from Czechoslovakia, he often worked late at night on his plan. He
formed a committee, which consisted of himself, his mother, some volunteers and a secretary.
He contacted the governments of several countries to ask them if they would take the children.But he was met with disappointment when  only the UK and Sweden said that they would help.But this did not stop him or deter him from his mission.

The first group of children left Czechoslovakia on March 14, 1939. They flew to the UK, although 7 other groups travelled by train and boat across Europe and the English Channel.
Now the most remarkable thing about this man is,he didn’t tell anyone outside of the committee what he had done, until after the war.Not even his wife!How many men could do this?They would have been bursting with pride and itching to tell anyone and everyone who would listen about their great accomplishment.

Not Winton though,his wife found a scrapbook with all the details.Imagine her shock at this?All these years she had been living with a hero which she knew not about.She quickly contacted a tv show and in 1988 he talked about his achievement on television.He was the subject on popular show"This is your life"
He went to the show as a member of the audience not knowing he was going to be the focus.Many of those he had saved then stood up in the audience to surprise him and to say he was shocked is an understatement.


Today, the rescued children call themselves ‘Winton’s Children’ and they often visit his house to thank him.He has met many of them,their children and even their grandchildren.They all feel very close to him and very much indebted to him.
Further groups of children were scheduled to leave on September 1st, 1939 but they were stopped by the German invasion of Poland.

He celebrated his 100th birthday by flying in a small plane piloted by the daughter of one of the rescued boys.
In September, 2009, a special Winton train travelled from Prague to London.
Nicholas Winton has been awarded the OBE and the Pride of Britain Award. There is a Czech school named after him, as well as a small planet.
In 2003,the Queen knighted him for service to humanity. He never regarded what he did as anything special and often said that he only did what anyone would have done had they witnessed the conditions in those refugee camps in 1939.

He was married to Grete Winton and they had 3 children.
Sadly Winton died in 2015, aged 106.What a remarkable man.He will go down as one of the greatest men in history.
Tags history news
Previous Post Next Post