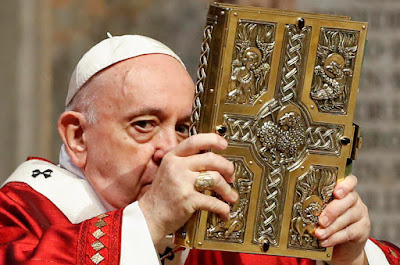 Pope Francis in his Pentecost 2020 homily,asks Christians to reject narcissism and pessimism.He shared the recorded message as part of the Pentecost service of the Archbishop of Canterbury, Right Reverend Justin Welby, on Pentecost Sunday.
Pentecost celebrates the moment when the Holy Spirit descended on the Apostles. One of the gifts they received was the gift of tongues that allowed people from all over the then-known world to understand the Apostles’ proclamation. Because of this, many consider the period between the Feasts of the Ascension and Pentecost as a time of prayer for Christian unity. The “Thy Kingdom Come” prayer movement, promoted by Archbishop Welby, has made this period a special time for Christians to unite in prayer for the evangelization of the world.

About Thy Kingdom Come

“Thy Kingdom Come” is a prayer initiative for Christian unity that started in 2016. Since then, it has grown to become a global ecumenical movement. In 2019, Christians from 172 countries took part in praying “Come Holy Spirit” so that more people may come to have faith in Jesus Christ.
This is the second time that the Pope Francis has contributed a video message for the “Thy Kingdom Come” movement. Last year for the first time, Pope Francis recorded an impromptu video message at the invitation of the Archbishop of Canterbury during a retreat organized in the Vatican for political and religious leaders from South Sudan.

Pope Francis’s message contrasted God “infecting” the world with life at Pentecost with the “deadly virus” that has ravaged the world amid the coronavirus pandemic.
He notes that on the day of Pentecost, people who spoke different languages assembled and encountered each other. But in these past months, we have been required to keep our distance from one another. Still, the Holy Spirit, the Comforter, assures us of God’s closeness and gives us the consolation that brings strength even amid suffering.
The Pope also expressed the desire that Christians may be more deeply united as “witnesses of mercy” for the human family in a world experiencing a “famine of hope.” He prayed that, through the Holy Spirit who bestows wisdom and good counsel, those charged with making decisions may be inspired to “defend human life and the dignity of work.”
Pope Francis warns that we have been “isolated and anaesthetized before the cry of the poor and the devastation of our planet.” He prays that, like the people who repented after Peter, prompted by the Spirit, spoke to them on the day of Pentecost, we too may see the need to “turn back to God and our neighbour”.
“We need to be united in facing all these pandemics that are spreading,” said the Pope. “Not only that of the virus, but also those of hunger, war, contempt for life, and indifference to others.”
source Vatican News.