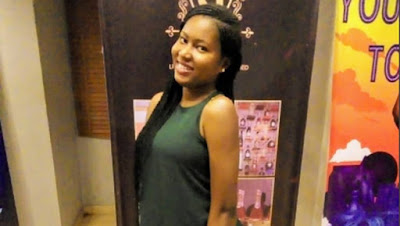 Justice for Uwa:The death of the Uniben student Uwa Omozua,has seen the Governor of Edo State, Godwin Obaseki, call for an immediate investigation into the alleged rape and murder,
Uwa, a 100-level Microbiology student of University of Benin,was allegedly raped and killed by some unknown persons while reading in a Redeemed Christian Church of God, RCCG, in Benin City.


The thought of that alone,is something i find rather incredible.In a church?What kind of animals are these?This is why i will forever disagree with those who are against the death penalty,people like these should be executed,no negotiations or humane regards for them in my books.
A family source who shared the story online, said Uwaila died on Saturday midnight at the University of Benin Teaching Hospital (UBTH) where she was rushed to after the attack. He said she was attacked with a fire extinguisher by some unknown persons.
Now,this is where Nigerian police infuriates me,maybe it's their choice of words or they just don't have a clue,i don't know.
According to a report from LIB blog,they reached out to the state police command spokesperson, DSP Chidi Nwabuzor, and he confirmed the incident but said the police only received a report of ''Assault Occasioning Harm'' and not rape as is being reported online.
This he said was a report filed by the father of the victim when she was rushed to the hospital.
I will bet all my life that the father never said or used the words "assault occasioning harm".This is a police term,so he has chosen to use those terms,how can you see a father see her child battered,in a coma and her faced busted and call that occasioning assault?
And this DSP Nwabuzor,should know better,brushing off such a serious incident as if it was a case of someone slapping or punching another person.

He then went on further to say,"I confirm that the incident happened and that the girl was assaulted but that of rape, nobody can testify. There was no one there that can testify that the girl was raped. The girl was in a Coma so they couldn't record a statement from her until she gave up the ghost."
This statement i find very stupid,there was no one there to testify it was rape.Does rape incidents normally have witnesses?Do you have an audience sitting in and watching?These huys are really something else.
It is the police's job to get medical facts and attain to the fact that it was rape or not,not getting bloody witnesses,even if there was a so call witness that saw them from afar,it still has to be confirmed medically.

The story we heard regarding Uwa's attack according to a family source was:

“The church’s security officer had gone to collect the keys to the church from its keeper when he was told that there was someone in the church already."He got to the church only to find Uwaila in a pool of blood  and next to her was the fire extinguisher which was used to bash her face."He ran back to inform the key keeper and his wife, who went to the church to meet her lifeless, thinking she was dead. After careful observation, they noticed she moved her hand and quickly rushed her to the hospital.
"It was at the hospital that Uwaila revealed she was reading all alone when some unknown men came into the church , beat, raped and hit her head with a fire extinguisher. However, she later passed on." 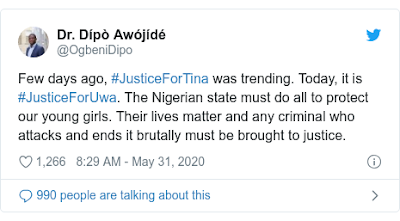 The outcry from the nation as a whole and especially on social media with the message and hashtag #justiceforUwa ,has led the Edo governor,Obaseki, in a post on his Twitter page,to call on the Nigeria Police Force in the state to investigate the circumstances that led to Uwa’s death.
His tweet read: “I have ordered the Nigeria Police Force ( @PoliceNG ) to thoroughly investigate the circumstances that led to the death of Miss Vera Uwaila Omozuwa, a 100-level student of the University of Benin (UNIBEN).”
The Governor stated that those found guilty will face the law.
“The @PoliceNG has been mandated to identify, arrest and prosecute anyone found culpable in her death. The Violence Against Persons (VAP) Law is in effect in our state.
“Using this law, we would ensure to investigate what exactly transpired and deal decisively with the those found complicit in the dastardly act, whoever they might be,” his tweet added.
Tags crime news Nigerian news
Previous Post Next Post