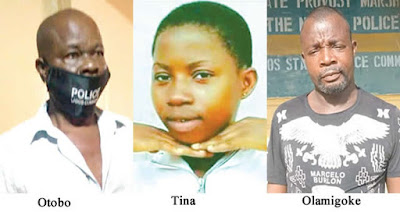 Justice for Tina,a hashtag #justiceforTina ,that came after the death of 16 year old Tina Ezekwe,who was killed by a stray bullet from 2  Nigerian police officers,yet againshighlights the terrible state of the Nigerian police.
Nigerians home and abroad,have been demanding justice for the death of the teenager,after she was killed as a standby,from a stray bullet from the gun of police officers from Bariga division, meant for a bus driver who had violated the nation wide curfew imposed by the government to curtail the coronavirus.


The cop was said to be from the Bariga Police Division.Reports indicated that the policeman was trying to arrest a bus driver for violating the nationwide curfew imposed by the Federal Government to check the spread of coronavirus.In the process, the policeman was said to have shot the bus driver and Tina standing by the roadside.
It was learnt that Tina, an Imo State indigene who resided at Bariga, was rushed to a hospital after the incident. However, she died on Thursday evening.
And this is where my blame of the Nigerian government comes in.How many times have we had cases of stupid and illiterate Nigerian police men,killing or maiming citizens over things that should never have happened?
When you employ illiterates who can hardly read and write,who have no idea of why they are wearing the uniform,and who think they can shoot anybody at anytime,anywhere,what do you expect?
What could warrant an officer wanting to shoot a bus driver simply cos he has broken a curfew put in place to curb a disease?Why should you need a gun for this situation?If you investigate,it all boils down to the 200 Naira bribery they were trying to coax out of the driver.
They will not employ educated and trained police officers,because they do not want to pay them accordingly.So instead,they will pick up touts and put them in uniforms,paying them peanuts.
How many times have we heard of policemen,stopping young boys and going through their phones on the streets and their laptops?This is totally illegal,but these men don't know and don't care,for them,they are the police and they can do whatever they like,especially when they have those guns in their hands.
When you see a typical Nigerian police today,it brings tears to your eyes.They look like thugs.No pride in their dressing,their appearance or the way they carry themselves.Their uniforms are faded and rough looking,they don't have boots and they wear normal day to day shoes,some even wear slippers.In the offices,you see very smart looking ones,but those on the streets,who are the ones suffering always look terrible.
I think they feel because they are on the streets patrolling,they are nobody.But these are the people that everybody sees,they are the reflection of the Nigerian police,when visitors come into the country,they are the people they see,nobody sees all the big big Oga's in their offices.
I am going to load a picture of  a Nigerian policeman in the 1970s here,and you compare him to what you see on the streets today. 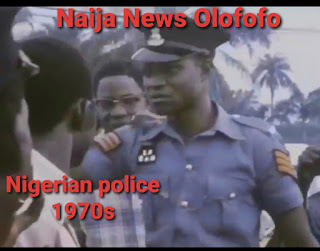 And you know what?I don't blame these men,after all,how much are they paid?You hear the government dedicating and awarding hundreds of millions,maybe even billions to security,to the Nigerian police and army,but when you see these men,you feel sorry for them.
Have you seen pictures of the Nigerian police school?It is not fit for dogs,i swear i am not joking.Have you seen their barracks?Where they live?It's even worse.
So when you put all these together,you realise that the Nigerian government are the genesis of our problems.You can't make an omelette out of an apple,and the apple also does not fall far from the tree.
RIP Tina,your government that was meant to protect you and build a bight future for you,has failed you.Sadly your case won't be the last.There were many before you and there are going to be many more after you.It is sad,but it is the reality of the Nigeria of today.
Tags news Nigerian news Nigerian newspapers
Previous Post Next Post