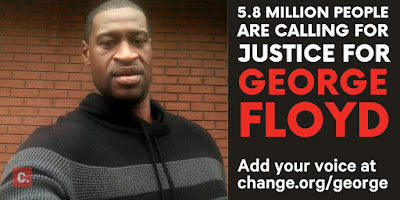 The George Floyd petition seeking justice, has gone down in history as the biggest Change.org US petition of all time.The petition now has more than 11.5 million signatures at the time of writing.
As early as when it hit the 5.8m mark,it already had the distinction of being the largest Change.org US petition of all time.The petition was set up in the wake of the death of George Floyd,who was killed when some Minneapolis officers knelt on his neck and
back,cutting off oxygen supply to his brain.He died of suffocation.
Derek Chauvin, was the police officer who was videoed kneeling on Floyd's neck despite desperate calls for him to stop from the victim,he was heard on tape telling the officer,i can't breathe.He has since been charged with third-degree murder and manslaughter. 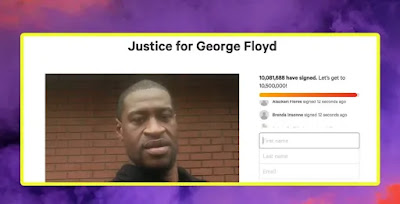 The incredibly,the campaign was set up by a 15 year old from Oregon,named Kellen,who said: "I had no idea when I started this petition that it would get this big, and your support means everything to me. Thank you for making your voices heard,Over 5.8 million people have signed this petition, which means this is now the biggest Change.org US petition of all time. And it's working. One of the four men responsible for this horrific murder is in custody."
"Our message is loud and clear: we will not stop until there is justice for George.
"District Attorney Mike Freeman needs to hear from us now to make sure the other three involved officers are held accountable. Five million voices can't be silenced and I want to share all your stories with him."
Previous Post Next Post