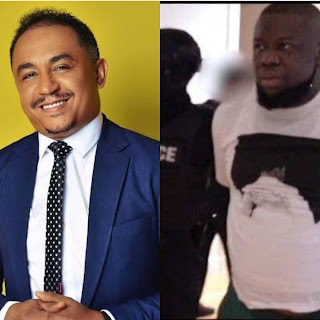 Daddy Freeze and Hushpuppi bromance ended in tears after Dubai police arrested the latter.The video of Daddy Freeze in Hushpuppi's house in Dubai,where he was mocking hard working Nigerians on minimum wage and asking them to apply to be Hushpuppy's driver made me sick!
What made me even more sick is the stupid and ridiculous excuses Daddy Freez gave for going to interview the arrested fraudster.Nigerians had been calling the ex Cool Fm presenter out,saying he criticises pastors frequently,but he can go and hang out with a
criminal and openly praise him.

In his defence,Daddy Freez said in a new video he posted on youtube,tha the arrested told him he's an influencer. He further revealed that Hushpuppi never did anything suspicious when they met as he got calls from international fashion brands during their meeting. Now,Daddy Freeze is an intelligent guy,you and i know that.How on earth could he have thought that Hushpuppi could have enough money to maintain that lifestyle from being an influencer?Who exactly is he influencing and how did he get the profile to be an influencer?
To be an influencer,you must have been famous in the first place,i am not talking about small time influencers,we are talking of those on the level of millionaires.Now,in Hushpuppi's case,he came from nowhere and started spending millions online,that was how he got known.Where did he get the millions from?He was not an influencer then was he?
Evert Nigerian knew that Hushpuppi was a fraudster,it was never in question.So how could Daddy Freeze,who is a media man and who is supposed to research his subjects before he engages them,not gonna know this? 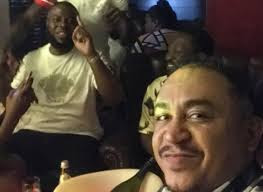 He then took his comedy to another level,when he started quoting scriptures as another reason why he had gone up to Dubai to meet and interview Hushpuppy.He insisted that he won't discriminate as Jesus never did the same, adding that he would never have hung out with Hushpuppi if he was a known criminal. He also recounted how Hushpuppi never discriminated against him even after his friends turned against him and unfollowed him on social media platforms after he began speaking up against Pastors.

On the accusation that he mocked Nigerians making an honest living while dining with Hushpuppi,Freeze stated that his jokes come off that way. He added that it was meant for haters and internet trolls, and not for those making an honest income and anyone who was uncomfortable with it can unfollow him.Such an arrogant twat.
It was cringing and very distasteful seeing and listening to Freez stick his head so much up Hushpuppi's a.ss!He was seriously kissing it,with comments such as ,"I have never seen a house like this o"...."Not everybody has the pleasure of seeing Hushpuppi before he takes his shower"....."Everything is Versace"...He even called him his family at a point.I could go on and on,but i want to throw up remembering all that stuff,so i will just pass.
One thing that came out of this is,most Nigerians now know that Daddy Freeze is an hypocrite and no better than the corrupt pastors he was criticising.For money,he sold his integrity and became the real puppy in Dubai with his tongue hanging out.

Here is the video below;