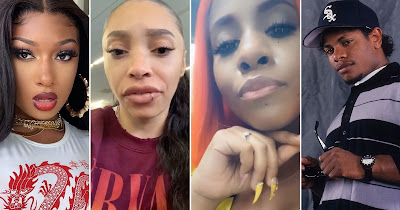 Eazy E's children, daughters,ReeMarkable and Ebie are once again beefing ,thanks to Megan Thee Stallion's latest single Girls in the hood.The two girls who have different mothers are at each others throat trying to keep their fathers legacy alive.Ebie has an older sister,Erica Wright,who is the rapper's eldest child.


Houston rapper Megan Thee Stallion,released "Girls in the Hood," a feminine take on N.W.A.'s 1987 record "Boyz-n-the-Hood" performed by Eazy-E,on Thursday.A few hours before the single went
live, Henree Wright, aka ReeMarkable,(i love that name by the way) posted an Instagram video expressing her frustration over the single. ReeMarkable insists she has no issues with any artist paying homage to her father, but is upset that Eazy-E's team will give clearance to other rappers, while denying her request to sample her father's work.

"I’m straight bothered and I don't really get bothered," she said in the video. "But I'm not bothered by these dope-ass artists that's making these dope-ass pieces of merch or these dope-ass musicians that's are making these dope ass songs. As long as y’all are paying homage to my father, I fuck with that 100 percent, right? What I'm bothered by is the people in the background who pushed the OK button and say, 'Go ahead and drop it, we co-sign it. We write off on it. ‘Cause he got kids that y’all won’t write shit off for. We’ve been trying forever ..."


She continued: "I got siblings that wanna be doing so much stuff in the likeness of my father, but we can’t — unless we wanna get some papers thrown on our table, a cease-and-desist. That shit's crazy. Somebody tell me how we stop that! 'Cause we want our daddy’s legacy, we do."


And that was what ticked off the drama,ReeMarkable's elder sister and Eazy-E's other daughter Ebie Wright,came online to react to what her younger sister had posted.The first thing she did was to clarify that she wasn't the one who made that statement.She then went on a  rant about how her sister who she claims her father didn't know,was always the first to jump on family matters,like she was the spokesperson for the family.
"I don't know her, my father didn't know her.And it's really strange to me that every single time something that has to do with my dad comes up, she's the first running to the internet to speak up, as if she's the spokesperson for my father or family. It's really, really fucking weird ... The only person who has been fighting, and is still fighting to this day, for my father's estate is me. Me and my mother ..."
But one thing they both agreed on was ,having no problem with those who pay homage to their father,they both endorseD Mega Thee Stallion's song,Girls in the hood.Ebie went on to say she fully supports Meg's single or anyone who wants to pay tribute to Eazy-E, as she believes her father has gotten "his proper respect."
Then Part 3 of the drama surfaced with,ReeMarkable responding shortly after, claiming Ebie was "delusional" and needed to "stop with the jealous shit."
"It is so sad that your own blood can get on the internet and try to bash you 'cause they jealous and envious of you. Ain't you 30 years old?" ReeMarkable began. "... Every time I get posted by a blog, or I'm on television, or my music is doing well, you get sad or depressed or mad—you and your momma. What's up with y'all? I'm your sister. We ain't family, but we're blood."
I hope these two get it together.They are both beautiful and charismatic ladies,imagine what they could do if they come together.I think Ebie probably wants daddy all to herself,which i can understand,after being the main girl all these years and ReeMarkable suddenly showing up,being a pushy one and also wanting some of the limelight.But if she is truly Eazy E's daughter,its not her fault if her dad had a liaison that produced her is it?Together you are one and strong and separated you are two.
I hope they sort it out soon,but if they don't,we sure are gonna have fun with their back and forth spats.