Is Olu Jacob dead or alive news debunked by wife

Is Olu Jacob dead or alive news debunked by wife 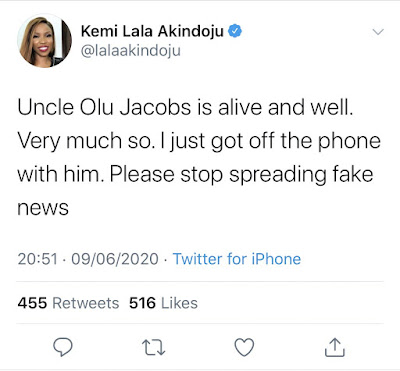 The Olu Jacobs dead or alive latest news that swept through the internet,has been debunked by his wife Joke Silver and a colleague,Kemi Lala Akindoju.The Nollywood veteran who is also an internationally acclaimed actor,is very much alive.
Kemi took to twitter to announce-“Uncle Olu Jacobs is alive and well. Very much so. I just got off the phone with him. Please stop spreading fake news”.


While his wife,Joke Silver,while speaking to one of the dailies said- “the family found the development so depressing that members had to speak out.”
She also said the actor whose real name is Oludotun Baiyewu Jacobs and born on 11 July 1942,laughed off the news. 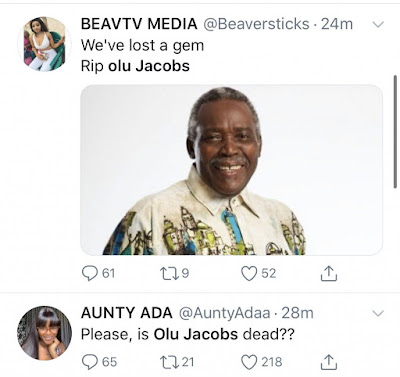 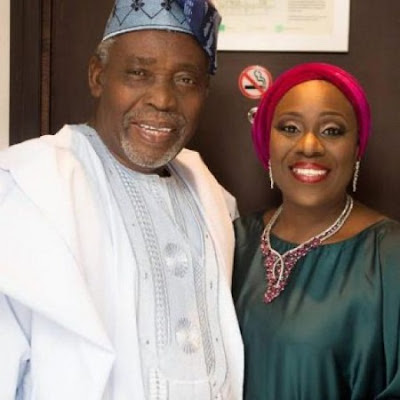 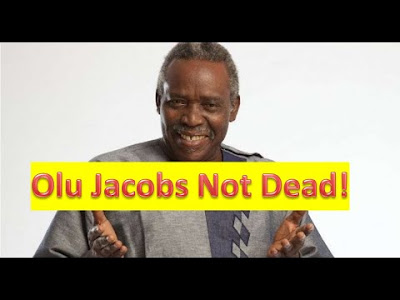 How did the dead or alive news all start?Well,recent pictures of Olu Jacobs,shows he has lost some weight.There was also a story recently in which his wife Joke,debunked a story that they were endorsing medication for diabetes.I think people just put two and two together and came up with 7,thinking he must be sick or something.But even so,how does that lead to he died news that swept the air waves?
It seems in Nigeria especially,they build up their celebrities to fall.Olu Jacobs death is not the first to be reported falsely.So many celebrities have been falsely reported dead.I don't know what people get from it.Why would you wish somebody else dead?Especially one who has not hurt you in any way?Does it extend your life span?
We wish Uncle Olu as he is fondly called, and his wife Joke Silver,many more happy and blissful years.
Tags celebrity Entertainment Nigeria Entertainment News nigerian entertainment Nollywood
Previous Post Next Post