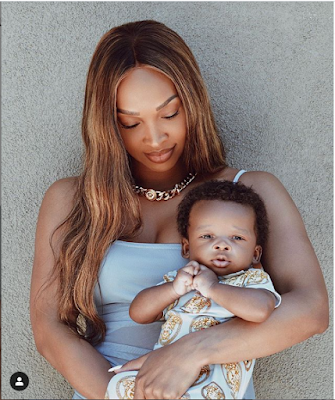 Malika Haqq baby has been shown off by her mother as the reality star and proud mother,  is celebrating her cute son Ace Flores who is 3-months today.Her Baby Daddy is rapper O.T Genasis,They must both be proud.
Actress Malika found reality fame after her many appearances on Keeping Up with the Kardashians, Khloé & Lamar and Dash Dolls. She is a close friend of Khloe
Kardashian.Haqq also appeared on Celebrity Big Brother in 2018.

The 37 year old who has a twin sister named Khadijah,also had a role as Penny Lent in the 2005 Disney superhero film, Sky High.