Maryam Abacha says my husband was not a thief

Maryam Abacha says my husband was not a thief 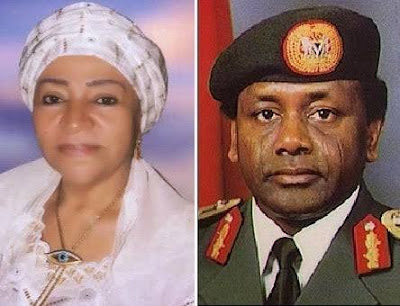 Former First lady and wife of General Abacha,Maryam Abacha, has described as lies reports of the Federal government discovering monies allegedly stolen by her husband while he was in office.
I find this amazing that this woman can even say this with a straight face.This is a man who has returned billions of dollars and still has more stacked away in God knows where.Not only that,but there were also strong and persistent rumours that,there was a deal in which
the family kept a billion dollars or thereabouts ,while returning some billions.

Where does she think this money came from?Her husband's salary?It is ridiculous really.In a saner country,all their properties and money would have been taken over completely.But,hey,this is Nigeria.
Check out some excerpts from the incredible interview below...


Mrs Abacha who granted an interview recently to commemorate his 22nd death anniversary, said it is evil to speak ill of the dead. In her words,

“How come this man was not a thief until he died? What is this amount of money after 22 years you say oh we have found this amount of money and we’re bringing it back? It is a shame to tell lies on a dead man! It is a shame to tell lies on your leader. If he had done wrong, God knows. If other people are putting the wrong on him, it is a matter of time.
They will kneel down like America is kneeling down now. Anybody that is evil will kneel down just like this corona has come to shut this world.” the Nation quotes her as saying

According to Mrs. Abacha, her husband helped a lot of people who no longer greet her again.

“He worked in Kano and he planted Kano people, but there are people he helped a lot but they are not even greeting me now for no reason. They just hate us. But why? It is Haram and Allah is watching us.” she said