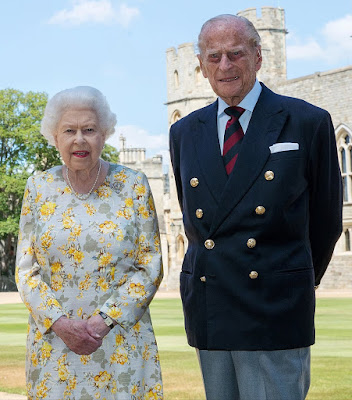 Prince Philip the Duke of Edinburgh,celebrates his 99th birthday today,yes you heard that right,99! He was born on the 10th of June and has been married to the Queen of England for 72 years! The royal family marks his birthday with the release of a rare portrait alongside Queen Elizabeth.
What are the odds that a husband and wife team lives healthily into their 90s?The Queen
herself is 94 years old.

In the photo, the Duke of Edinburgh stands next to the monarch in the quadrangle of Windsor Castle, which is where the royal couple has been in isolation since March amid the coronavirus pandemic.

Prince Philip has on his tie of the Household Division — the seven British army regiments that serve the Queen. Queen Elizabeth, who turned 94 in April, wears a floral dress by her dresser and confidante Angela Kelly, who is living on the castle grounds.