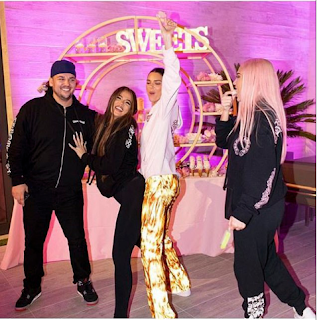 Rob Kardashian weight loss caused a stir ,when he made a rare appearance as he attended his sister Khloe Kardashian's 36th birthday party on Sunday.Rob's "now" look went down well as he enjoyed some well deserved attention.

The 33-year-old former reality star, who hasn't been seen in public for a long time showed off a much more slimmed-down physique in a black sweatsuit including Chrome Hearts hoodie and a baseball cap.

Rob Kardashian, who is a father of one,courtesy of his child with Blac Chyna, was pictured all smiles as he posed for photos with his famous sisters Kourtney, Kim, Khloe, and Kendall at the 'family only' event.

He was also pictured with her sister Kourtney's ex-Scott Disick and Khloe Kardashian's ex Tristan Thompson.